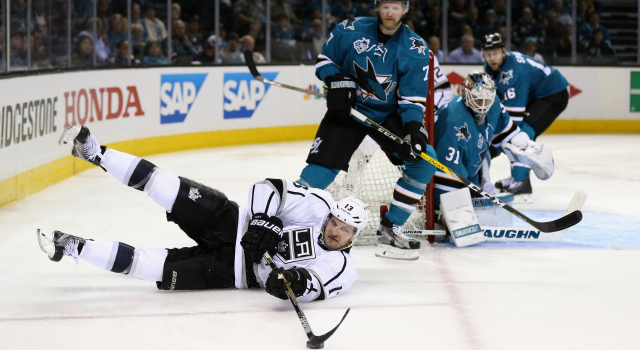 If there was a clear advantage the Kings held over their opponents in the regular season, it was the degree to which they operated in the offensive zone. By directing 56.4% of all shot attempts towards the attacking net, their +3.8% advantage over Dallas, the team with the second-best Corsi-for rating, represented the same gap between Dallas and the 19th and 20th-rated possession teams, Edmonton and Florida. In other words, they play in the offensive zone! A lot!

That hasn’t necessarily been the case in their first round series against the San Jose Sharks, in which the teams have more or less sawed themselves off in five-on-five play, and San Jose has operated with a slight advantage while with the power play with five goals to Los Angeles’ three goals with the man advantage and one shorthanded goal. Jonathan Quick has also been outstanding and facing tougher pucks than his counterpart, Martin Jones; War-on-Ice gives the Sharks an advantage of 90-75 in scoring chances during five-on-five play and a 47-38 advantage when high danger chances are tabulated.

So why haven’t the Kings been able to bank on their traditionally strong possession rates and wearing their opponent down by playing the puck in the offensive zone?

“Starts in our end,” Marian Gaborik said. “If you can get out of our end cleaner, get some speed, it can set up our forecheck and our zone time in their zone. That’s what we have to clean up a bit and just use our speed through the neutral zone. We scored two goals driving to the net and crashing. We just have to do a little bit more of that still and just make it uncomfortable for Jones. That’s what happened. Schenn throws it twice on the net, one goes off Lewie, one with the great screen by Kinger there. So, we just have to do more of that.”

As Gaborik noted, in the third period of Game 4, the Kings ultimately set up shop in the offensive zone and found success orchestrating the convergence of bodies and pucks towards the net. On Thursday, both he and Vincent Lecavalier spoke about the challenges of establishing a cadence against a San Jose team that has had success creating difficulty in Los Angeles’ attempts to leave its zone and work in five-man units up-ice.

Vincent Lecavalier, on why San Jose’s forecheck has found success to a greater degree:
I think they’re all tight games, like I said. I think special teams, they’ve been a difference in a few games but no, I think 5-on-5 we have to worry about what we have to do, play the way we know how to play and bring it to them and play fast. So, like I said, there’s a few games there where special teams were a difference and that’s why it’s 3-1.

Lecavalier, on the puck possession battle:
It’s tight hockey, it’s playoff hockey. It’s two good teams going at it and it could definitely be 3-1 in our favor. It’s not, but, like I said, it’s tight 5-on-5. It’s really tight both sides. But now obviously we have no choice. We can’t afford to lose another game. We have to do everything in our power to get that possession back or to get more possession in their zone and keep in their zone and get some O-zone time and that could be the difference right there.

Lecavalier, on how the Kings can get more possession time in the offensive zone:
I think in the third period we did that. [There were] a lot of shots from the point. I just feel we were more in the zone, we were on them. There was absolutely no hesitation in our game. It was fast hockey and the way we know how to play so we’ve just got to do that.

Marian Gaborik, on the Sharks’ forecheck against the Kings’ breakout:
They’re forechecking us, obviously. As forwards we can do also a better job to maybe do a little more skating interference to make it easier on our D. And once our D get it to us, just have to try to get out of our end cleaner in terms of having good support and just get that puck and make the next play to set up the forecheck or a rush or whatever it is.

Gaborik, on whether the Kings are generating enough 5-on-5 chances:
I think we need more. It is tight out there but we need more of that.