Rate of penalties called not favoring the Kings 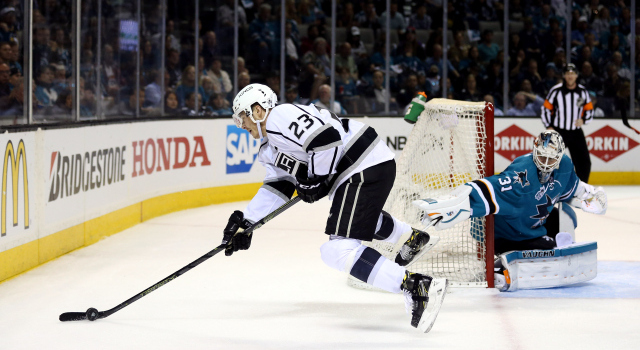 It is generally said that in the playoffs, referees tend to swallow their whistles. Such has not been the case in the series between the Los Angeles Kings and San Jose Sharks, which has seen the Kings average 4.5 shorthanded situations per game, above the team’s regular season rate.

This hasn’t worked in the favor of Los Angeles, which like San Jose boasts a productive man advantage and has averaged 3.25 power plays a game through four games. Keep in mind that Sutter’s Law acknowledges that playoff series are primarily determined by goaltenders, special teams, top players, unsung heroes and discipline, and other than “top players,” “discipline” has been the Kings’ widest area of concern. The issue was raised again when San Jose scored on three of its four opportunities in Game 4 to open up a three games to one series lead. Earlier in the series, the Sharks were awarded a full two minutes of a two-man advantage, a peculiarity in a postseason game.

“We’ve seen some funny ones this series, if you look at it,” Darryl Sutter said. “Five-on-three they scored, and neither one knew that the other guy was calling the penalty.”

“I feel they’ve been calling more than during the season, for sure,” Vincent Lecavalier said. “I don’t know if they had a meeting before – the NHL, or whatever – but you see around the league, around all the series, there’s been a lot of penalties called. It’s on us to stay disciplined and keep our sticks down and skate and try not to get those penalties.”

Some have been legitimate calls, as Sutter acknowledged when referencing errant high sticks in the series, but several have also developed from post-whistle scrums, when referees are generally more inclined to allocate even penalty minutes between the teams.

The Kings, though, still had to kill the penalties levied against them, and they weren’t able to do so in a pivotal Game 4. And it’s not as if this is some out-of-the-blue development; Los Angeles ranked 23rd in the league with an average of 10.6 penalty minutes per game in the regular season.

“I know the theme today is ‘San Jose’s power play.’ I’d say the game for me is ‘how come we didn’t have more?’ We have a good power play, too,” Sutter said. “There’s missed calls in the third period. When it’s three-two, there should’ve been some calls, clearly.”

Vincent Lecavalier, on good and bad penalties and the Sharks’ power play:
You want to stay out of the box. There’s always good and bad penalties. Tripping penalties are never a good penalty, or a hooking penalty, but sometimes it might happen that you save a goal. Obviously then it becomes a good penalty. Obviously you want to stay out of the box and they’re, like I said, they have a good PP, but they are going to get some opportunities so we have to shut them down and when we get our opportunities as a power play we have to capitalize on them.

Lecavalier, on the vibe inside the locker room and the third period of Game 4:
It’s good. I thought we played great in the third period, really took it to ’em. We’ve just got to play the same way now, but for 60 minutes. Obviously their special teams, their power play, they made it happen yesterday. It was a difference in the game. But it’s one game at a time. We’ve got to, like I said, play as fast as we did in the third period.

Lecavalier, on his impression on his new teammates not panicking:
It’s a great group. They’ve been through it before but obviously you never want to be in that situation but right now I think guys are still positive about how we played in the third period and we just have to bring it out next game. It’s not time to panic, it’s time to focus on tomorrow’s game and focus on a big win.

Lecavalier, of it it’s possible to be confident while down 3-1:
Yeah, of course. In any series I think if you’re at 1, if you win one game you’re in the series. Win a big game tomorrow, all a sudden we’re down 3-2 but if you win the next one it’s 3-3. Games are so tight that you have to push yourself, just focus on getting that win and go from there.

Lecavalier, on the Kings’ breakouts and how the forwards can help:
Be in the right position, that’s what we work on every day and that’s something that we take good pride in, is our breakouts. … That’s one thing I noticed when I came here, everybody’s in good position. I feel like we’ve got to keep doing that and do it better. Support each other, it’s always a big thing, and if we do that we’ll come out together and come out with speed.

Marian Gaborik, on whether there are too many penalties being called after the whistle:
I don’t know. I couldn’t tell you, really. I didn’t think about it that way. It is what it is. We’re not making excuses, we’re not blaming the refs. We’ve just got to play our game and play hard like we can and try to have five guys on the ice.

Gaborik, on how the Kings can dig out of a 3-1 hole:
We just have to focus on one game and win one game and go from there. That’s our focus.

Gaborik, on if the Kings can draw from being down 3-0 to the Sharks in 2014:
We’ve been in this situation so we know what it takes to win that one game and go from there. That’s what we are focused on and that’s what we have to do.

Gaborik, on being calm with their backs against the wall:
We have a group that never quits. Like I said, we’re going to tomorrow night’s game with the mentality to win one game and play a shift at a time, period at a time and believe we can go back to San Jose. [Reporter: Sounds like the mindset you had in 2014?] You have to win four in order to advance, no matter what. We’ve won one game so far but it’s all about the next game right now.