Oh the irony of another San Jose matchup 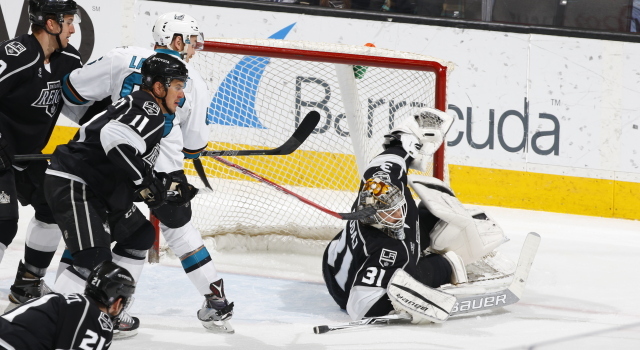 Just a week ago the Reign were watching Game 1 of the Kings-Sharks series on the bus on the way to San Diego. Right about now the Reign are on the bus again, this time on their way to San Jose. The parent club Kings are already there, set for Game 4 of their best-of-7 series tonight at 7:30 p.m. at SAP Center against the Sharks, trailing 2 games to 1.

The Reign are facing the Barracuda, the Sharks’ AHL affiliate in a best-of-5 first round matchup starting Friday night at 7:30 p.m., also at SAP Center.

“It’s kind of cool,” said left wing Michael Mersch on Tuesday. “I think maybe we’ll overlap with them for a day there. Other than that, it’s been a great series to watch between LA and San Jose.

“That’s been great and we’ll be playing at SAP too so that’s pretty cool. Other than that, both teams are just focusing on their opponent.”

Head coach Mike Stothers stressed the need to get up to San Jose early to get acclimated, hence the reason why the team is traveling north today.

“Just get up there, get on their ice surface and get a practice under our belt and just get playoff focused and playoff ready,” said Stothers, whose team went 9-3-0-0 against the Barracuda in the regular season.

While the Kings will play at SAP Center tonight, the Reign will get a chance to practice there on Thursday. The Sharks and Barracuda share SAP Center as their home arena and Sharks Ice, a facility similar to Toyota Sports Center in El Segundo, as their practice rink.

The similarities could even stretch to the matchup on the ice.

Sound familiar? Every game of the Kings-Sharks series has been decided by one goal.

“It’s definitely ironic, two organizations to have American Hockey League and NHL facing each other in the playoffs,” goalie Peter Budaj said. “First of all, it’s a pretty big accomplishment for both organizations to have such good depth, especially in the American Hockey League for both teams to make it into the playoffs. It’s pretty exciting. … We’ll do our best and hopefully our mother team LA Kings can come back and do some damage, too.”