Nuances in King’s ability to create space for teammates 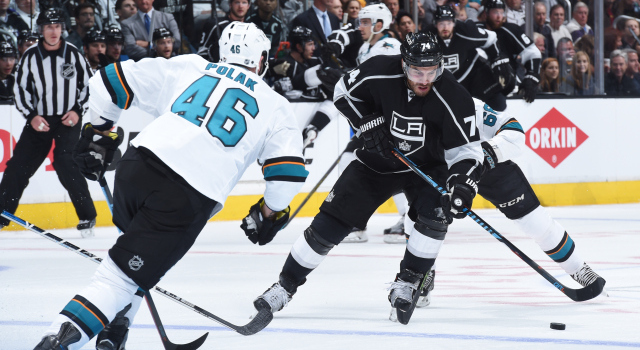 It has been a stuttered season defined by abrupt starts and stops for Dwight King in 2015-16.

One of nine active Kings to have won two Stanley Cups with the club, King was on track to begin his sixth NHL season when he suffered a broken foot while blocking a shot in the team’s final pre-season game and missed the first two and a half months of the season.

He returned in Edmonton on December 29 and scored as part of a two-point, plus-two performance that was followed by a string of standout play. When he picked P.K. Subban’s pocket in the neutral zone, strode in alone on Ben Scrivens, faked a shot and opened up the goaltender before coolly sliding the puck between his legs, he accounted for his 12th point in only his 28th game. It was a stretch of play that far exceeded his previously established output.

And that’s when the winger hit a wall. He recorded just one assist over the final 19 games of the season – a primary assist on Tyler Toffoli’s goal in Minnesota on March 22. Through his first three playoff games, the forward who has previously seen his production rise slightly from the regular season to the postseason, and who emerged with an unsung, five-goal performance in the club’s 2012 Stanley Cup run, is yet to post a point.

That’s not to say he’s played poorly, but rather that he hasn’t yet cashed in for stringing together a handful of promising shifts that have freed up some time and space for his teammates. Players don’t get to play with Anze Kopitar and Marian Gaborik for being a drain on the team’s efforts.

“The way they play, Kopi’s puck possession, so you try to work hard for him get him the puck so he can make his plays, and Gabby’s speed and a goal scorer, so all I’ve got to do is try and get pucks loose for him, get ’em to him and create space for him,” King said. “It obviously doesn’t change, but for them, more emphasis on creating a little more room so they can make some plays.”

It has been noticeable through the first three games. He has been strong on the puck and, as Darryl Sutter noted, strong on maintaining possession through zone exits, an area that the team places a high importance in. His presence allows other top players like Kopitar and Gaborik to play in the offensive zone. It’s why he has also seen time alongside players like Jeff Carter and Tyler Toffoli at times as part of his versatile usage.

“Better plays coming out of our zone than in their zone,” Darryl Sutter said. “If he makes better plays in the O-zone, then it’ll probably show up in his point production.”

His five-on-five scoring rates were more or less in line with those previously established in his career, though his possession rates relative to his teammates were in the red to a greater degree than in any other NHL season of his. Part of that may be due to sharing the ice most frequently with Trevor Lewis and Dustin Brown in 2015-16 instead of other players who may be more inclined to play in the offensive zone (though, to be fair, Brown’s raw 5×5 Corsi numbers were the best of his career).

Most common linemates, by season: (via Stats.HockeyAnalysis.com)

It will be interesting to watch King to continue to work alongside both Kopitar and Gaborik as a player who has been quietly battling for the puck well in this series and creating 50/50 battles out of pucks that may have otherwise been more likely to be handled by the opposition.

“I think I’ve brought my game along a little bit,” King said. “Obviously I had a tough end of the year, but I’ve been given an opportunity here and am finding my way, and like you said, things like that I’ve got to do to be effective, and I’ve got to continue to do that to help my linemates and help our team.”

King, on the battles along the boards against San Jose:
I think they have more of a swarm. You might be able to hold off one guy on a normal basis, but here once they see a little bit of green light, the second guy’s coming in. So you’ve got to be aware and you’ve got to use your teammates, too. You can draw two guys in, maybe make a quick bump or something like that, and it gives you a little more opportunity to have some time and space to make something happen. There’s a lot of battles in playoffs in general, I mean most teams you play are going to be a lot of board battles so you’ve just got to prepare for some guys have size, some guys have speed, and some guys have a combo. So you just know their skillsets and know what you have to do to be effective.

King, on whether playing the Sharks in the playoffs is the same from year to year:
Pretty close. Obviously their core’s exactly the same. Some guys change on both sides but their style of game hasn’t changed and that’s what you prepare for and that’s what you look at to find weaknesses in and we’ve got to continue to do that.

Drew Doughty, on the low-scoring series:
I think we can get more chances. If you ask me I haven’t seen Jones make too many big saves. He’s made the saves he’s needed to make and yeah, they could be big at that time, what I mean by big is he hasn’t made any huge, fancy saves or anything like that. So, I think that means we aren’t getting enough chances and we aren’t making him work enough. Yeah, they’re a good defensive team but we can be a better offensive team and we need to start doing that tonight.

Doughty, on whether animosity was building during Game 3:
I don’t know if that’s what happened, I think it just came down to we’re down 2-0 and we’re playing like it’s the last game of our season. That’s how we treated the last game. We had to treat it that way because if you go down 3-0, there’s no way the Sharks are going to let us come back and win four straight again. We just played like it was our last and that’s how the emotion comes out if you think about it that way. You never want to play your last game so when you are going to go out there and play your last game you’ve got to play it as hard as you possibly can and that’s what we tried to do.

Milan Lucic, on the physicality in the regular season versus the playoffs:
I think once the playoffs start it’s all pretty much the same as far as the physicality goes and guys trying to lay the body. I guess players do it a little more to help their team win because there’s so much more on [the] line when it comes playoff time. That’s my experience throughout my one season in the Western Conference.