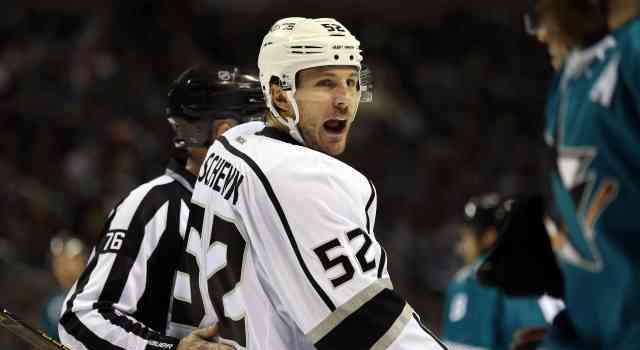 Luke Schenn, on the loss:
I mean, you can’t spot them a three-goal lead. It’s tough to come back on anyone, let alone a team that you’re facing in the playoffs. Our penalty kill wasn’t near good enough tonight, and special teams were obviously the huge difference. They got three power play goals, and we obviously didn’t get any. Special teams needs to improve, for sure, if we’re going to climb back into it.

Schenn, on the difference in the penalty kill:
I don’t know. They found a couple seams – obviously the cross-ice one to Burns, and then [Thornton] made a nice play to Pavelski in the slot. He was wide open, and then I think the third one was a bit of a lucky bounce. But, still, nonetheless, you can’t spot them a three-goal lead. At the end of the day, we have to generate a little bit more, and … climb our way back into it.

Schenn, on the difference between the first two periods and the third period:
I think in general, we didn’t put nearly enough pucks to the net. … We didn’t put nearly enough to the net in the first two periods. We passed up a few chances looking for that extra pass and playing a little bit too much to the perimeter. I think that’s something that needs to improve – just throw pucks to the net. Bounces are there to be had, and guys battle in front.

Schenn, on not making it difficult to Jones and playing on the perimeter:
For sure. Playing in your D-zone, you want to keep them to the outside. They can have all the zone time they want as long as it’s not dangerous and a threatening side, so I think that’s something that we’ve got to look at. We did a little bit of a better job in the third, but that’s still not nearly good enough,. It has to be a full 60 minutes.

Dwight King, on the penalty killing:
Yeah, that’s the difference in the game, obviously. The three goals, and they had a couple more looks. Things we talked about after, but things we’ve got to be better at and tighten up. Obviously that’s group been together probably for five or six years so they’re familiar with each other, but overall we just need to refocus as a PK and bear down on our clears.

King, on the difference in the penalty killing performance from Game 3:
I mean, not much was different through the nights. Obviously little things go a long way. Just an example was probably the last goal. It went off one of our guys who blocked a shot, and it found a way to Marleau and he puts it in. Some nights it goes to our guy and it clears. But then there are some things we need to learn from. It was a hard lesson to learn, but we’ve got to move forward.

King, on whether there is solace in knowing the team came back two years ago, or whether the team just takes a one-game-at-a-time approach:
I’d probably go with the latter. Obviously you can use your experience, but to get out of it, we’re going to have to just focus on one game, like you said. Our goal is to go back and establish our game, just start playing a lot better. Obviously be a little better on their top guys. They’re making the difference right now, and we’ve got to find a way to neutralize it.

King, on lessons from coming back from three games down two years ago:
The simplest thing is that it’s not over until a team gets four wins. That’s the case again.