Where has the improved defensive play come from? 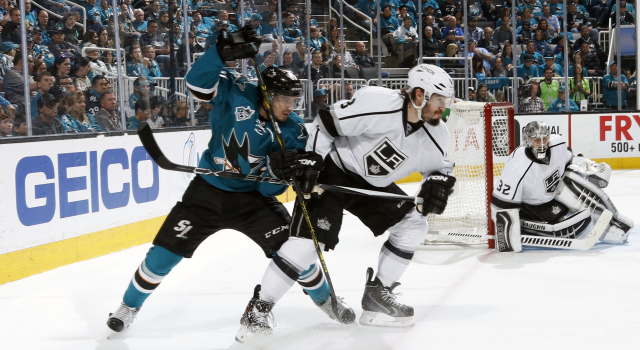 The Los Angeles Kings have new life in their best-of-seven series after winning Game 3 in San Jose on Monday night, and if there’s a backbone to their improvement beyond Game 1, it’s through their tightened adherence to limiting quality opportunities generated by the opponent.

Game 3, though, may not have been the team’s best performance of the series.

“I thought the best game we played was Game 2 by a significant margin,” Darryl Sutter said.

The data backs him up.

But if there’s a way that the team has been able to make improvements beyond Game 1, it’s through their tightened adherence to checking and structured defensive play. San Jose’s only goal on Monday came through some poor puck management in the game’s first shift, but beyond that moment, the team tightened up in its own zone, much as they did in Game 2.

“Obviously checking’s a huge part of it,” Luke Schenn said. “The first couple games, there weren’t a ton of chances either way. You obviously saw the shots pretty low for both teams, but checking’s obviously a huge part of it. You want to be on your toes in the defensive zone and get to pucks quickly and try to be physical to eliminate them from the puck. I think another big thing is when you get the puck, breaking it out and making clean breakouts, not just giving it away. Checking’s obviously big, but it was pretty back-and-forth. I think both teams created lots of chances, and that’s expected. You’ve got a lot of skill on both sides and guys who can make plays. Checking’s big, obviously.”

Jonathan Quick also produced one of his typically excellent post-season performances. In 11 career playoff games at the SAP Center, he has a save percentage of .938, and a glance at the numbers above indicates that Quick was most certainly on his game on Monday night.

Rob Scuderi, who was a part of that 2013 Kings-Sharks playoff series in which space on the ice was minimal to non-existent, joked about creating a “top-30 list” of signature Quick postseason opuses when asked about the goaltender’s proclivity for emerging in big games.

“He’s kind of created his own monster, so I don’t know where you would rank it, but we know what to expect from him,” Scuderi said. “He’s a big game player. I’m not sure where it would rank, but we’re certainly glad he was on top of his game.”

The team also blocked 27 shots, showing a desperation to avoid falling into a three-nothing hole. How does one line up for a shot knowing that the puck is coming off the stick of Logan Couture, or Joe Pavelski, or even, gasp, Brent Burns, who had 10 shots blocked as part of 19 total attempts?

“Just getting into the shooting lane and hope it hits you,” Scuderi said.

“I thought in Game 1 there were a couple of shots that as defensemen we could’ve had, and if it gets past you, then it’s a scrum or a tip or something, and you want to avoid those chances if you can. But I thought everyone did a good job. You try to fill the lane and make ‘em shoot to the area where the goalie’s got it covered and hopefully things work out OK.”

With a perfect five-for-five penalty killing performance, including a two-minute sequence in which the team blocked three Burns shots and one shot from both Pavelski and Couture, the team exhibited a defensive adherence that has been associated with them since the early stages of their emergence as a league power earlier this decade.

The team doesn’t have the lead in the series, but they have a little bit of momentum, which is more than what could be said entering into Game 3.

“It’s huge, but it’s still just one game,” Scuderi said. “We cut the deficit in half, but like I said, losing the first two games at home is not an easy chore to overcome, so we have to ramp it back up for tomorrow.”

Rob Scuderi, on time in the offensive zone in Game 3:
Yeah, I thought we did a good job, start-to-finish, this time. I think that was the most important thing of trying to get some sustained offensive pressure and attack.

Scuderi, on whether it’s clear when Jonathan Quick is “dialed in”:
They’re very good at that mid-zone deflection, and he made all the adjustments to make those saves. It might be one of the toughest things for a goalie to do, and he’s been kind of on top of it really since the beginning of the series. I think we haven’t given him as much support as we’d like, but it’s nice to know he’s back there making those stops and giving us a chance.

Scuderi, on any solace in the ability to limit San Jose’s depth lines:
No, it’s a game-by-game thing. That’s a big line, they’ve played together most of the season, and they’ve done very well when you add up their totals. But if you throw all our eggs into one basket trying to stop them, I’m sure someone else is going to step up. We have to stay on it, and it’d be nice if we could continue that trend of shutting the other guys out and focusing on the top line and seeing if we could improve our chances even more of getting another win, but we’ll just have to keep doing the same things.