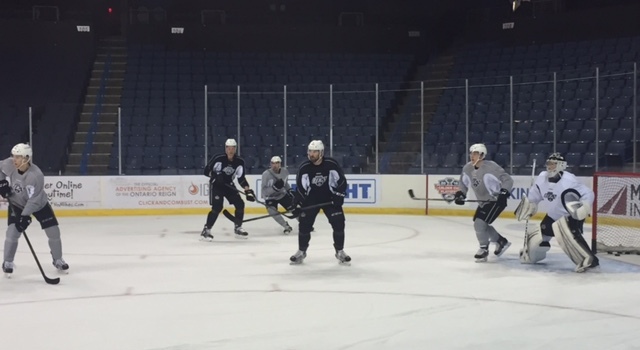 Some notes from today’s practice, a day before the Reign travel to San Jose ahead of their first-round Calder Cup Playoffs series that will start Friday night.

–Paul Bissonnette has been limited to just 35 games due to various injuries and last played on Feb. 19. Bissonnette missed the last 21 games of the regular season with what was called a mid-range injury and will return just in time for the playoffs. “Yes, I do think Biss will play this weekend,” head coach Mike Stothers said. “I think he will play Friday.” Bissonnette has two goals and one assist but isn’t known for his offensive production as he is about being a tough winger with veteran experience. He’ll slot in on the fourth line.

–The “newer” rookies, with the exception of goalie Jack Flinn, will not travel to San Jose when the team leaves tomorrow morning. That means forwards Michael Amadio, Spencer Watson, Sam Herr and Matt Schmalz and defenseman Damir Sharipzyanov will stay behind and work with the Kings’ development staff, according to Stothers. “Had a good meeting with all those guys yesterday, just explained the situation and how valuable and important they are to us. One minute you’re a black ace and you’re practicing separately to the fact that you could be dressed and playing in a game,” Stothers said.

Stothers didn’t have to look far to draw a comparison. Just as quickly as the Reign got defenseman Kevin Gravel back last week, he was called up to the Kings days after.

“It’s funny how the game works, we just talked about it, we were all excited we got [Kevin] Gravel and Nic [Dowd] back and I said until Friday rolls around and sure enough I’m in my hotel room [in San Diego last weekend] and [GM Rob] Blake is calling me — we’re going to need Gravel — we had just checked in,” Stothers said. “‘Gravs don’t unpack, you’re going.’ That’s how quickly it could happen, right? They’ve got to be ready.”

–Brett Sutter did not skate but was seen working out. Stothers has given various veterans maintenance days this week.

–Will have another post today after brief visits with both Michael Amadio and Spencer Watson.