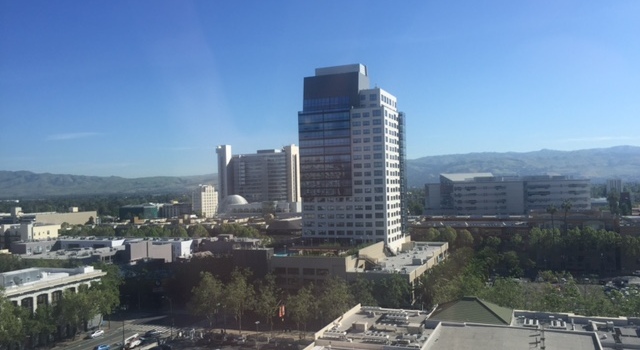 And now for our 15th Good Morning, San Jose post. The trip up was as usual as usual could be, other than the fact that the Iron Maiden 747 – Ed Force 1, as I learned – taxied away from us as we boarded the plane. The San Francisco Giants’ plane was also nearby, dressed in Eastern Airlines livery with a “SF” logo emblazoned on the left side of the nose. We see interesting corporate and charter jets at our small aviation terminal on the south side of LAX. Occasionally there will be a large jet owned or leased by a head of state or prominent tycoon, adorned with private logos or painted with flags from their home country. Our plane is a modified A319 with Delta colors – we had previously been with Air Canada, and they were excellent, as well – and there’s nothing from the fuselage that suggests anything but anonymity, other than when it lands in airports that do not have regularly scheduled Delta flights. For instance, we occasionally will fly a chartered 767 (and, less frequently, a 747) for cross-country flights, and Delta 767s do not regularly land in places such as, say, Buffalo, so other than a large transcontinental jet landing in airports that do not usually receive them, we take off and land without drawing a gaze. Most teams fly this way. There are many teams that charter with Delta and Air Canada, though some team charters do have their own recognizable insignia. Air Shark used to transport the San Jose Sharks and staff from city to city, though I believe San Jose has upgraded its plane, and most of the logos are now featured on the inside of the aircraft. He may be the play by play man for the team the Kings are trying to come back against, but for fun photos of NHL travel, Randy Hahn is a great follow on Twitter.

We landed in San Jose at 4:10 p.m. During this approach, there was an AHL game being played inside the SAP Center.

It was hot, hot, hot in the South Bay, so much so, that wait, WHAT IS THAT- 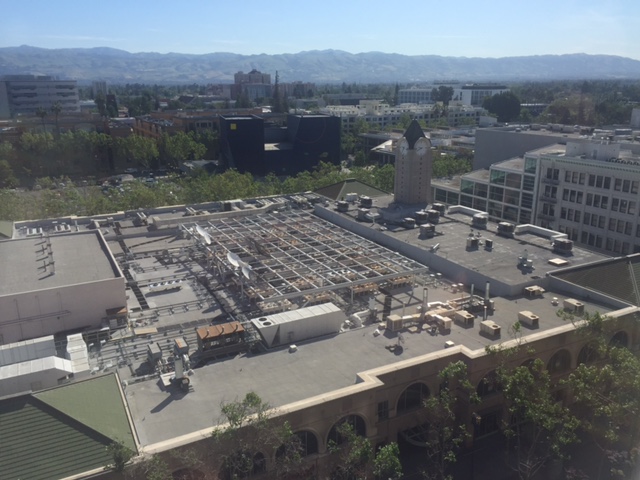 Insiders, that is a massive network of Munters and gas absorption refrigeration units that this hotel room directly overlooks. I feel the Hockey Gods, nay, CARL MUNTERS HIMSELF, is trying to tell us something. Surely this is a very good omen.

Those cooling units will get some good work in on a warm day in Silicon Valley. We’re about to head inside into the chilly confines of the SAP Center, where the Kings have an 11:30 a.m. morning skate scheduled. The Sharks, meanwhile, are currently holding their own skate at their practice rink across town. There’s plenty more to come on a busy game day in the Stanley Cup Playoffs. Let’s talk soon.