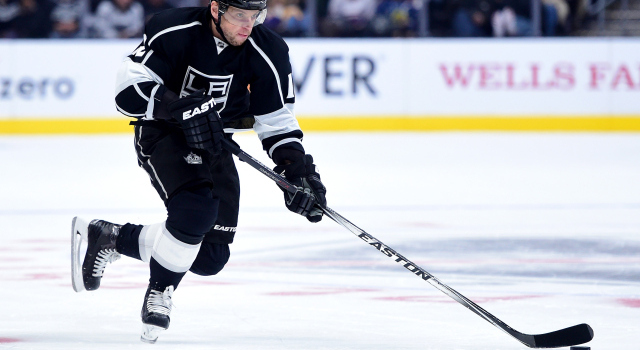 On Saturday night Marian Gaborik jumped onto the “running train,” as he described it, ending a nine-week span that bridged his February 12 injury and April 16 return to the lineup. His absence was due to a knee sprain suffered when Dominic Moore collided violently though not predatorily with him during the first period of an eventual 5-4 overtime win at Madison Square Garden. In that game, Gaborik scored a power play goal to provide a 2-0 lead as Los Angeles ultimately banked on Anze Kopitar completing a hat trick with Peter Budaj pulled in the final minute before Tanner Pearson’s scored the game-winner off a rush during three-on-three play in an emotional win.

That type of offensive timeliness would be welcome in a playoff series the Kings trail the San Jose Sharks two-nothing. They’ve scored once at even strength in 120 minutes.

“I mean, they’re a good team overall, you know? I think the shots, it was a pretty tight game out there,” Gaborik said. “The last game I thought we did a better job defensively, but we had some surges in the end. We have to do more of that.”

Part of that effort will be to cultivate more offensive zone time, a challenge in a game in which there wasn’t much space and even fewer second and third opportunities. Gaborik, though, was one of the team’s bright spots in terms of creativity and skill. Playoff goals are rarely rush-type highlight reel markers, but rather come from sustained offensive zone time, pucks and bodies arriving at the net at the same time, and second and third opportunities from close range.

“We have to make it harder for Jones to make saves,” Gaborik said. “You don’t see a whole lot of pretty goals in playoffs, so we need to work for every chance, every goal, and we need to do that, especially in the blue paint. Try to hit the net with a purpose, and even if it’s not a great chance, just try to make it so there can be a rebound or a second chance. We have to get the second, third opportunities and find puck and just make it difficult for Jones.”

In a game in which the Kings missed the net 24 times, those rebound attempts weren’t always available. As a player with the capability of individually creating plays and spreading out the defense with his skill, Gaborik’s offensive penchant will be a significant asset in a Game 3 that Los Angeles can’t afford to lose.

And despite the time missed, he was still able to stay in motion to make those familiar plays.

“As soon as you get the puck, whether it’s on the wall or [elsewhere], the first thing, I just have to keep my feet moving, and then everything comes from that,” he said. “Move the feet and try to create some sort of separation and create what’s given. We had some chances off the rush. We have to do more of that and especially use our speed. We have fast, fast forwards, but if you’re standing around, and you try to go from standstill, it’s tough. We just have to keep our speed and skate and move our feet as five. It doesn’t do us any good if one guy’s skating and the other two guys are standing still, so we just have to work off each other and get some speed, and that’s how we get chances off the rush or create separation, and that’s where things are happen.”

Gaborik, on whether he was happy with his performance:
Like I said, I felt better and better as the game went on, but overall, everybody needs to raise their level.

Gaborik, on whether the Kings were trying to be too “fine” to get pucks through:
Well, I think they’re a hard-blocking team out there, but we just have to find the lanes, whether it’s defensemen or us forwards, to find the lanes and create the lanes because if somebody’s in the lane, it’s whether you’re a second late or you’re waiting too long, so just try to get it off with our sticks quick and make sure it goes to the net, and like I said, shoot it with a purpose.