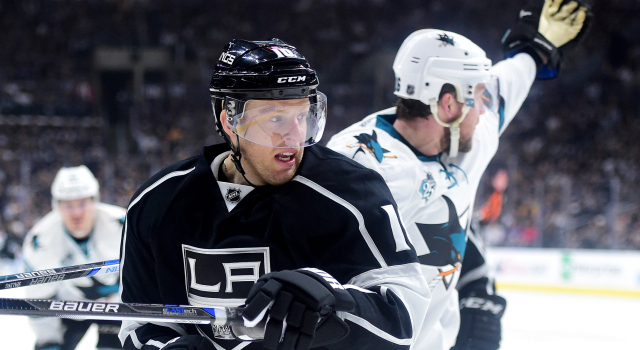 Good afternoon from the team plane, which is being loaded up for the short flight up north. When we boarded the plane, it was adjacent to the Iron Maiden 747, which has since departed for Tokyo, and the San Francisco Giants’ team charter, which will follow a similar flight plan (to the Bay Area, not Tokyo) after today’s matinee at Dodger Stadium.

As for Hockey Stuff, the Kings held an optional practice in which players took the ice at roughly 12:30 p.m. after team meetings. There was noticeably an up-tempo, crisp and focused pace to practice that included rush chances and offensive zone work. Both goaltenders were on the ice, but Alec Martinez didn’t skate; both Drew Doughty and Jeff Carter took the option. Because it wasn’t a full group, there were no real line rushes.

Darryl Sutter wasn’t available today, but I spoke with both Marian Gaborik and Tyler Toffoli about last night’s game and will have additional stories up this afternoon. “I felt better as the game went on,” Gaborik said of his return. “Obviously missing nine-plus weeks and jumping onto the running train, at the start it was fast, obviously, out there. But as the game went on I felt better and better.” More interesting stuff from the two on what San Jose has done effectively to limit Los Angeles’ zone time.

More to come from the Bay Area. Enjoy your Sundays, Insiders.