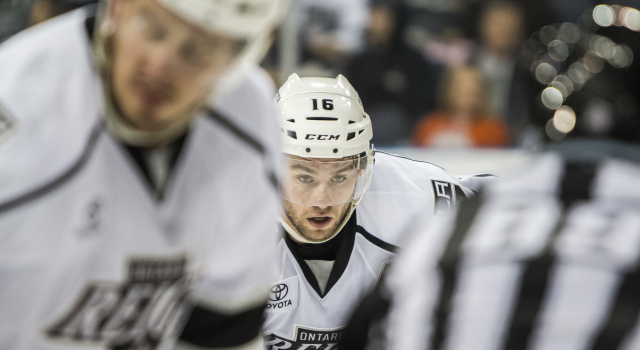 The Reign (44-18-4-1, .694 winning percentage) clinched the regular season Western Conference title with a 4-2 road win on Friday night against the San Diego Gulls. Central Division leader Milwaukee (48-22-3-2, .673) lost 5-2 to Bakersfield on Friday and was eliminated from contention for the top seed with Ontario’s victory.

Pacific Division-winner Ontario secures home ice for every playoff round through the Western route and should it reach the Calder Cup final could still potentially have home-ice advantage if its final winning percentage is higher than that of whichever team represents the East.

The race to face the Reign in the best-of-five first round playoff series has been down to the Charlotte Checkers and San Jose Barracuda for weeks now, but the Reign’s opponent will finally be determined this weekend, perhaps as soon as Saturday night.

That leaves the door wide open for San Jose, which needs just one point in its final two games to earn the right to face the Reign next week. The Barracuda (30-25-8-3, .538) face the Stockton Heat at 7:30 p.m. on the road Saturday and again at home on Sunday at 3 p.m.

The Reign went 9-3-0-0 against San Jose in the regular season and 2-2-0-0 against Charlotte. The Calder Cup playoffs will start next week and no matter who they face, the Reign will play their first two games on the road before returning home for the final three.