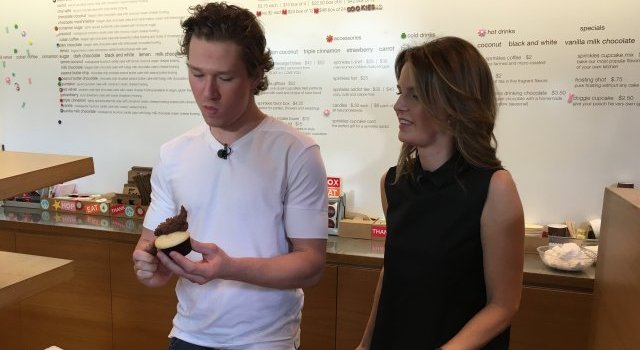 Kevin Gravel grew up in the small town of Kingsford in Michigan’s Upper Peninsula, about two hours north of Green Bay, Wisconsin.

“There is no commute in the U.P. There are no roads over 55 in the UP,” said Gravel, who appeared in five games with the Kings this season. “There is no traffic jam, maybe like a two-minute traffic jam because of construction, or something like that.”

There will likely be a clear roadmap to the team’s roster next season, but as of now, it looks like there’s still a bottleneck of personnel in the attempt to replace Alec Martinez, who isn’t expected to play tonight because of an undisclosed injury.

Both Gravel and Jamie McBain left the ice at roughly the same time, and it’s possible that both players could take warm-ups, but in hearing the excitement in McBain’s voice and the way his play was discussed by Darryl Sutter at a press conference this morning, he’ll be the primary target to step into a right-side role on the blue line.

“Jamie’s been solid for us all year whenever we’ve put him in. It’s just a matter of the minutes,” Sutter said. “Obviously we have a top end with our guys, and if you look at last game, we go down to five, and we have a couple guys with very limited playoff experience in the lineup in that game in Schenn and Brayden, so it definitely affected us. So what do we expect out of Jamie? We expect him to be a really good competitor and move the puck. If he doesn’t, then we’re going to have a problem.”

The 28-year-old McBain has 345 regular season games to his name, but he has never appeared in the Stanley Cup Playoffs with Carolina, Buffalo or Los Angeles. He averaged only 12:14 of ice time while posting two goals and nine points in 44 games with the Kings this season, but the team simply won games when he dressed, going 30-10-4. In his two regular seasons with the club, Los Angeles went 45-17-8 when he was in the lineup despite injuries and imperfect defensive depth being among the factors leading to his playing time.

McBain said his favorite player to emulate when he was younger was Joe Sakic, but Darryl Sutter is just looking for someone to play with energy on the blue line and compete hard, and get the puck into the hands of the forwards with a good pace.

Gravel, meanwhile, remains available should his name get called at any point during this series, and has learned from his limited regular season action.

“I think just pace and strength of the players [is different from the AHL],” he said. “Everything’s one step quicker up here and guys are stronger. When they lean on you, you can definitely tell the difference between now a guy down there leaning on you in the corner [or] a guy up here leaning on you. In terms of the pace, I think lanes just close a little bit quicker. You’ve got to really get your head up and when you see your option take it because if you take that one extra stride it’s going to close up here. You maybe have that extra second down there to kind of process what you want to do with the puck but up here guys are quick, they know what they’re doing, and they’re quick to make the decisions.”

Nick Shore is also a candidate to return up front after having taken rushes alongside Dwight King and Trevor Lewis.

Should McBain play, he’ll provide another player capable of advancing the puck crisply out of his own zone, which would be an asset against a San Jose team with sizable forwards that found success in hemming Los Angeles defensemen deep in their own end.

“It’s going to be a battle,” said Jake Muzzin, who was fine in coverage but turned the puck over upon leaving the defensive zone and was credited, for whatever it’s worth, with a game-high four giveaways. “Big guys, hang onto the puck, they want to create plays by hanging onto the puck and so do we. Possession teams, they grind you down low, so we have to be good in our zone and I think we can be better.”

The Kings are also a top possession team, and part of that ability to operate in the attacking end comes with the success they’ve had at cleanly leaving their own zone with the puck. Against a team like San Jose that is effective on the forecheck, that’s a significant challenge.

“I think we’ve got to be better on our breakouts, one,” Muzzin said. “We were hemmed in our zone a couple times there and it just gives them momentum and it’s tough battles down low like that and if we were cleaner on our breakouts we don’t have to do that. And faceoffs I think [is] another one. They had a couple goals off faceoffs where we’ve got to clean up some stuff and get out there quicker or help or whatever it may be. Those two areas.”

“We’ve got to be faster. A little cleaner with the puck, a little faster and I think we take away a lot of headaches in our zone.”

It is possible that Marian Gaborik could make his return to the Los Angeles lineup tonight and play for the first time since he suffered a knee sprain in the first period of an eventual 5-4 overtime win over the New York Rangers on February 12.

Gaborik wasn’t available to meet with the media today, but Vincent Lecavalier, who will appear in his 72nd career playoff game, spoke on what the skilled forward would bring should he return to action.

“Obviously he’s got speed, he can score goals and he’s done it a lot of times over the years,” he said. “He’s a big part of our team and yeah, it’s exciting, for sure.”

Gaborik resumed skating in late March but had his rehabilitation and preparation accelerated over the previous week, when he joined the team in practice and recently began taking line rushes.

“Yeah, he’s been practicing very well,” Lecavalier said. “He’s got a lot of speed. I think even him at 75 percent is probably faster than a lot of guys. That’s how fast he is. But, like I said, he brings a lot to the table, obviously, and we’re pretty excited to have him if he’s ready.”

One quick note: If you visit a Sprinkles location in Los Angeles, you can purchase a special LA Kings cupcake created by Tyler Toffoli. The limited edition cupcake, comprised of dark chocolate cake, creamy vanilla frostring and rainbow sprinkles, will be available from April 15-30. 10% of proceeds benefit Kings Care Foundation.

Via Joshua Cooper of Puck Daddy: How Tyler Toffoli learned to embrace his inner cupcake