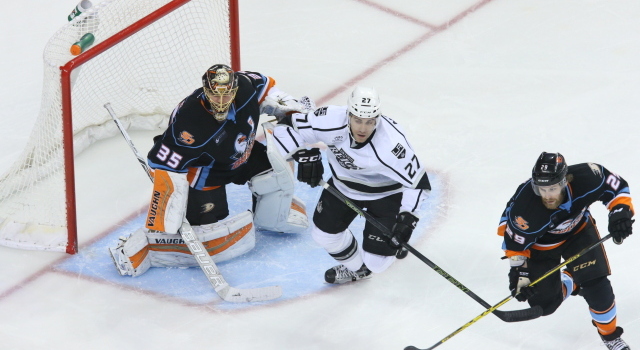 Reign game breakdown
In their second-to-last game of the regular season, the Reign secured the Western Conference title. Ontario (44-18-4-1, .694 winning percentage) used three goals in the third period to down rival San Diego (38-23-4-2, .612) in a 4-2 road victory Friday night. Locked at 1 going into the final period on goals by San Diego’s Matt Bailey and the Reign’s Jordan-Samuels Thomas, Kris Newbury gave the Reign the lead as he fired in his 10th of the season. Ontario then used goals minutes later by Nic Dowd (shorthanded) and Michael Mersch (power play) just 37 seconds apart to take command of the game. Mike Sgarbossa answered immediately after Mersch’s goal to make it 4-2, but goalie Peter Budaj and the Reign defense stifled San Diego’s efforts during a 6-on-4 with a late power play and goalie Anton Khudobin pulled. Budaj’s 32 saves earned him his league-leading 42nd win of the season. Captain Vincent LoVerde returned after missing 11 games with a cracked trachea.

Three stars
–Kris Newbury – “We didn’t acquire Newbs to be a checking centerman, so bring something.” This was said by head coach Mike Stothers on the morning of March 25, challenging the then-slumping veteran to up his production. Since then? Newbury has nine points in his last nine games and with a goal on Friday, extended his points streak to five straight games (3 G, 4 A). His goal at 12:14 of the third period gave the Reign its first lead of the game and they used it as the springboard to two more. Newbury read the play well and got free in the slot to bury a feed from Justin Auger.
–Nic Dowd – The Reign welcomed back their top center from his recall with the Kings and he did not disappoint. Dowd used the forechecking efforts of Mersch to take the puck in the Gulls’ zone, deke by Andrew Welinski and beat Khudobin on one of the more prettier goals of the game. The shorthanded tally was the Reign’s 7th of the season and Dowd’s 14th goal overall. Slotting between Adrian Kempe and Sean Backman, Dowd is — for now — not playing with usual winger Mersch with the exception of special teams play.
–Michael Mersch – The left winger on Thursday discussed the need to “gear up” for the playoffs in this two-game series with San Diego to end the regular season. The gears are turning: Mersch has been a point-per-gamer in April (3 G, 3 A in 6 GM). With one game to go, Mersch has the opportunity to be a 25-goal scorer after netting his team-high 24th by beating Khudobin where he beats goalies the most, within feet of the blue paint. The Reign finished 1-for-5 on the man advantage due to his power play goal and his work contributed to a perfect 6-for-6 PK performance (not to mention the shorthander).

Turning point
Dowd’s shorthanded goal followed by Mersch’s power play goal in a 37-second span gave the Reign a 4-1 lead and too much of an uphill climb for San Diego.

Stat fact
–1 – Point needed by San Jose this weekend (in two games) and if it’s earned in the Barracuda will face Ontario in the first round of the playoffs. San Jose plays at Stockton tonight at 7:30 p.m.

This and that off-ice
Defenseman Kevin Gravel was recalled by the Kings on Friday afternoon. … Forward Paul Bissonnette took warmups but did not play. He’s missed 20 straight games as he nears a return from what’s been called a mid-range injury.