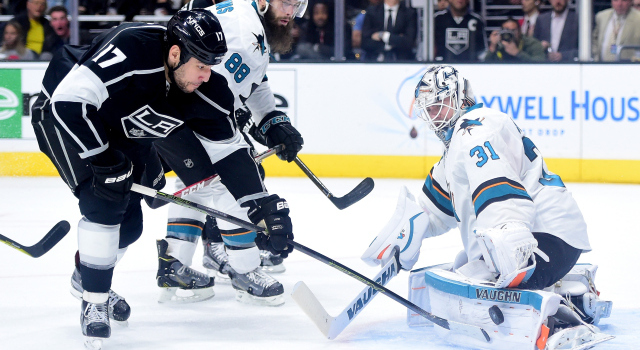 Milan Lucic, on what was the difference tonight:
Our execution wasn’t very good. As you saw 5-on-5 we weren’t able to get a goal, and not only that, not enough quality chances and we’re not making it hard enough on them in the defensive zone. We’re not getting enough traffic, we’re not getting enough second-chance opportunities. We’ve got to start playing our game and right now we’re not playing our game at all. We’ve got to stop playing with frustration and start using our emotion in the right way because frustration is a waste of emotion and we’ve got to go out there with determination and start playing our game.

Lucic, on how the Kings can be better:
Good puck movement, you know, tape-to-tape passes, all five guys together in all three zones and execution. When you get chances and opportunities you’ve got to score and right now we’re not doing that.

Lucic, on Game 3 on Monday night in San Jose:
We’ve got to play a lot better to get ourselves back in the series and we have an opportunity to do that Monday night so all our focus and energy has to go into Monday night and do whatever it takes to win to win.

Kopitar, on how this compares to when the Kings were down 0-2 to the Sharks in 2014:
It’s a completely different situation. Our mindset’s got to be to go out there and win the next game and just build off that. That’s where we’re putting in our heads tonight, we’re going to prepare tomorrow and we’re going to go up there and be better.

Kopitar, on being down 0-2 in the series:
Definitely not the start that we wanted but, again, we’re hopping on a plane tomorrow with just one thought in our mind.

Kopitar, on the Sharks and what they bring:
We did a lot of scouting and everything, there’s a bunch of video that you watch and you know what they’re going to bring. Now it’s our job to push back and again, play better.

Marian Gaborik, on what’s going wrong for the Kings:
I think we’re beating ourselves out there. We have to correct a lot of things. We didn’t generate a whole lot of quality scoring chances. We have to have Jones work way more that he’s been working. We had pretty good surge at the end there but that’s too late. We have to regroup and go to San Jose and come back a tied series.

Gaborik, on how he felt in his first game back:
Felt pretty good just need to get better and better and like I said, we have to be better overall, each of us and take our game to the next level.

Gaborik, on what the Kings need to do differently:
We need to play faster. We have to execute. We made a lot of sloppy plays, passes weren’t stick-to-stick like they should be and we have to crash the net even more. Throw the pucks to the net and, like I said, make him work in there and execute.

Gaborik, on if the Kings believe they can win two in San Jose:
Yeah. That’s our goal starting with the first game and go from there.