Kings to recall Gravel from Ontario 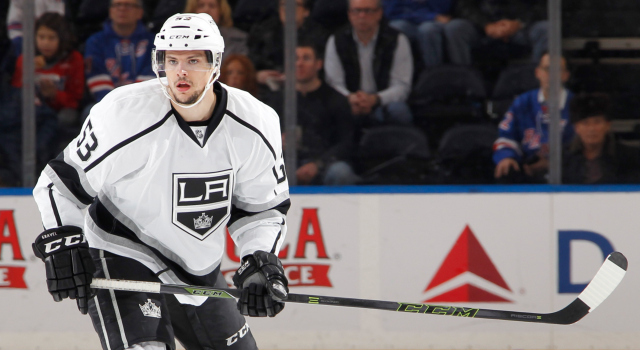 Update: The Kings made the moved official at 2 p.m. PT on Friday.

The Kings are expected to announce that they’ve recalled defenseman Kevin Gravel from AHL-Ontario. Gravel took the ice with the team during an optional practice Friday morning at Toyota Sports Center.

This marks the third call-up for Gravel, who was recently with Los Angeles and appeared in the 5-4 overtime win over Calgary on April 5 but had been sent back to Ontario earlier in the week. The 6-foot-4, St. Cloud State alum has appeared in five games with the Kings this season and made his NHL debut on Feb. 2 against the New York Islanders. The 24-year-old averaged over 11 minutes of ice time in his five NHL games with zero points and an even rating.

Gravel’s recall raises questions about the availability of Alec Martinez that the team, because of the guarded nature of injury information in the playoffs, would prefer not to answer. After being deemed “day-to-day” and missing four games due to an undisclosed injury, Martinez returned to action in Thursday’s 4-3 Game 1 loss to San Jose but logged only 11:43 of ice time through the first two periods and did not return to the bench in the third.

Gravel, a 5th-round pick by the Kings in 2010, ranks second among Reign defenseman in scoring with 7 goals and 13 assists for 20 points in 55 games. He sees regular time on the power play and penalty kill and is a plus-4 on the year with 30 PIM.

Reign head coach Mike Stothers predicted such a scenario could be possible before Game 1.

“We don’t really look too far ahead because the Kings play tonight and somebody could be gone tomorrow,” Stothers said on Thursday after Ontario’s practice. “They might not even make it to the puck drop come Friday night [in San Diego].”

The Reign play at San Diego tonight and Saturday at 7 p.m. as they close out the regular season before the playoffs start next week.