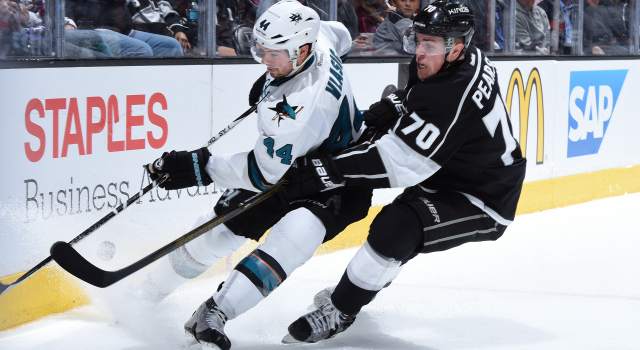 On the difference in the game:
Close game. A couple faceoff goals. Center lost center on the winning goal.

On whether San Jose’s forecheck gave Los Angeles problems:
I think the second period we made good adjustments after the first period. We were really good, and I think that both teams are going to do that.

On Alec Martinez:
He didn’t play in the third period. Didn’t play most of the second period, either.

On “sloppy” play in the defensive zone:
I think once we get down a defenseman that was there. But, again, it was two faceoff goals. Wasn’t much and they scored what, four goals on 23 or 4 shots? Gonna have to be better than that.

On how evenly matched the teams are:
Depends how our top players [play] versus their players. I think tonight it was sawed off, that part of it. You know, it goes deeper into your lineup than that. I think if we’re only going to get 23 or 4 or 5 shots or whatever it was at the end of the game each, then it might be a match-up that’s bigger than just your top guys up front. It might be the goaltenders.

On Tomas Hertl’s goal shortly after Trevor Lewis’ shorthanded goal:
Yeah, it was a momentum goal, but I think the second period, didn’t we score a power play goal that second period? Yeah, those goals are all in bunches, if you look at it. But the winning goal in the third period is a cycle over, that’s a center-center goal. Really clear.

On whether Joe Pavelski gives the Kings “the most concern”:
Yeah, they’ve got lots of guys. [Reporter: What makes him such a tough match-up?] He’s got a good line. … Did you ask Peter about Kopitar and Jeff and guys like that? Same thing. Jeez, what makes him a tough match-up? They’re good players.