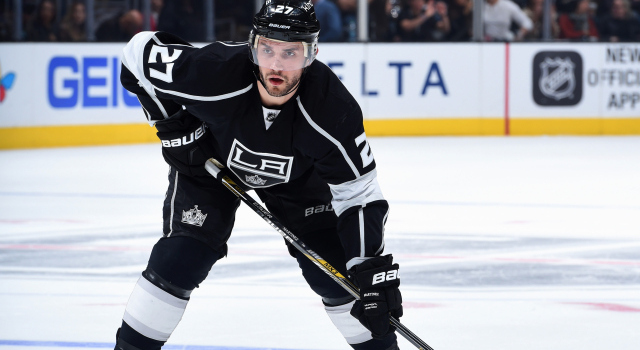 Compounding the Los Angeles Kings’ loss to the San Jose Sharks in Game 1 of their Western Conference Quarterfinals series was the absence of Alec Martinez from the bench in the third period.

This is the Stanley Cup Playoffs, so naturally there was no real update from the team after the game.

“He didn’t play in the third period,” Sutter said when responding to a question about Martinez’s absence. “He didn’t play most of the second period, either.” There were no other updates after the game.

It’s not a confirmation of where the injury occurred, but Martinez blocked a pair of shots in his final three shifts of the game, one on a Joel Ward slapshot with just over eight minutes to play in the second period, and one on a Patrick Marleau wristshot some five minutes later, according to the play-by-play log.

The defender missed the final four games of the regular season after having been deemed “day-to-day” with an undisclosed injury, and Sutter declined to provide any type of update after Thursday’s morning skate when asked about his status in advance of Game 1. Injury information is not easy to pry from the team at this time of the year, so Martinez’s progress will be gauged partly by his presence at practices and morning skates. Los Angeles is scheduled to practice at 11:00 a.m. Friday at Toyota Sports Center.