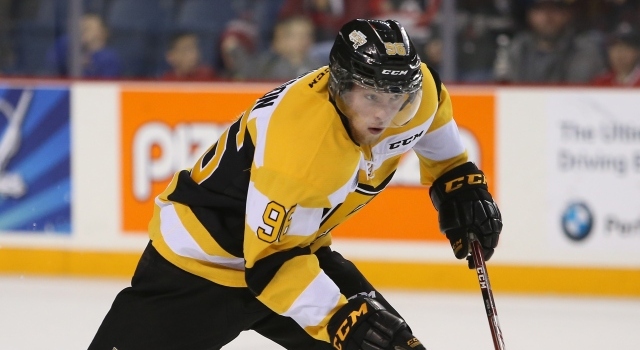 The Kings have signed forward Spencer Watson to a three-year, entry-level deal, the team announced on Thursday.

Watson, who will turn 20 on April 25, will report to AHL-Ontario, which has two games left in its regular season before the playoffs begin next week.

The 5-foot-10, 170-pounder was selected by the Kings in the 7th round (209th overall) in the 2014 draft and just finished up his OHL season with the Kingston Frontenacs, whose playoff run finished on Wednesday night when they were swept in the second round by Niagara.

Watson, a London, Ontario, native, led the Frontenacs in goals (43), assists (46), points (89) and power play goals (15) in 64 games played. His plus-minus of plus-31 was second on the team. Kingston finished on top in the Eastern Conference and went on to win its opening series 4-games-to-1 against Oshawa. In nine playoff games Watson had 3 goals and 14 assists (17 points).

Kings Director of Player Development Nelson Emerson said via phone on Wednesday that Watson’s game is comparable to that of one of the newest members of the Kings.

The hope is that while in Ontario, Watson can continue to develop into a pro and whether he gets a chance to get into the lineup will be determined by head coach Mike Stothers.

Emerson added that one of Watson’s upsides and something that’s the Kings development staff as a whole is the fact that Watson’s a great student.

“The biggest thing we love about him is when we drafted him he started to work on his game,” Emerson said.

Waston appeared in 233 regular season contests in four OHL seasons with the Frontenacs, finishing his junior career with 119 goals and 129 assists (248 points). His playoff point totals also averaged over a point per game with five goals and 20 assists for 25 points in 22 games. Watson was invited to Hockey Canada’s camp for the 2016 World Junior Championship team but did not make the final roster. He’s also a finalist for the William Hanley Trophy awarded to the OHL’s most sportsmanlike player.

“He’s done everything we would have wanted of him,” Emerson said. “He does what he does, he scores goals, offensively puts up numbers and I think that’s exactly what you’re going to get from him.”

Below are his junior stats, courtesy of Elite Prospects: