From the AM skate: Brown, Doughty, Lewis, King, Martinez 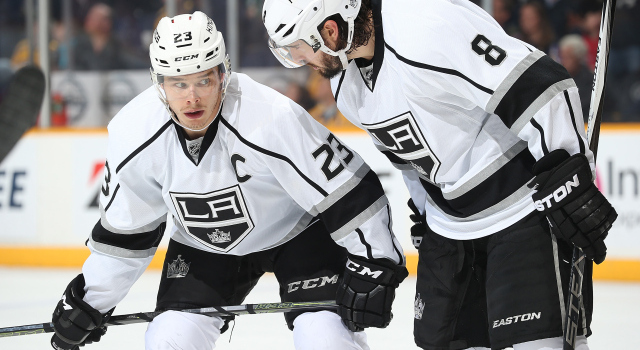 Dustin Brown, on Trevor Lewis and what he provides as the unsung hero:
I think a lot of it just comes from his attitude, really. Not necessarily anything anybody else will see except for the guys in this room, really. He gets asked to do a lot of different things whether it’s PK or fourth line or first line. He can kind of fit in anywhere and give a jump start or fill a hole when we need it. In saying that utility-type player it’s just his attitude that he brings to it. You never see him sulking or complaining. He just kind of goes about his business and tries to help the team. Again, it’s probably something more in the room where he’s always there for ya.

Drew Doughty, on whether the team is mentally and physically ready:
Yeah, everyone’s ready. Everyone is just prepared for this game, prepared for this series. We’re so excited to get it going. Watching some of the other NHL games last night that really gets your mind into things and gets you excited to play playoff hockey. So, everyone here is ready. We’re fully prepared by our coaches and all we’ve got to do is go out there and out-compete them.

Doughty, on whether this playoffs feels different after missing last year’s:
I wouldn’t say it’s any different. Kind of used to this feeling, used to being in the playoffs even though we did miss it last year. Just excited to get it going again. This is the best time of the season to play hockey, the most exciting time, the time when the top players play their best and then all the other players step up to the plate as well. So, playoffs are a team effort and you’re not going to win without every single guy on that team playing well and that’s what’s exciting about it.

Alec Martinez, on playing on the right side:
Sometimes throughout the year we change up pairings or we have injuries and things like gives us a little flexibility, which is good. There’s obviously adjustments to be made between reads, stick position, angles, things like that, but I’ve actually come to maybe even like it better than the left but it’s something that I’ve worked on and the coaching staff has helped me with so it’s been good.

Trevor Lewis, on being named the unsung hero by his teammates:
It’ awesome to see your teammates think of you like that and it’s definitely an honor to be that for this team.

Lewis, on what characteristics allow role players to step up in the postseason:
Your top guys, they kind of go up head to head and they’re going to match up with each other and I think it’s about your bottom guys or your role players that have to chip in and score some goals and do all the little things that win you series.

Dwight King, on Trevor Lewis being voted as the team’s unsung player:
The hard-working, checking, hard to play against players are valuable. Any top teams have six forwards, two defensemen that are elite and they have to cross each other off for it to be a series. Then it comes down to, like you said, guys who work hard for their opportunities and create chances that can sway the series. That’s what Lewie can do. He does everything. He can chip in here or there, he’s a good penalty killer, hard forechecker, all those little things. Obviously it’s like he wins the award every year, [the things he does] you may not see on the stat sheet, but he does them.

King, on what he remembers from his first playoff game in 2012 against Vancouver:
It was a little nervousing. It takes about two shifts maybe to get — it’s kind of the weird thing about that is just taking in the environment because it was a Canadian city. But once hockey came to hockey, even from the start, our team was rolling pretty good that year. So, you just didn’t get lost in anything else besides what you had to do on the ice and that helps.