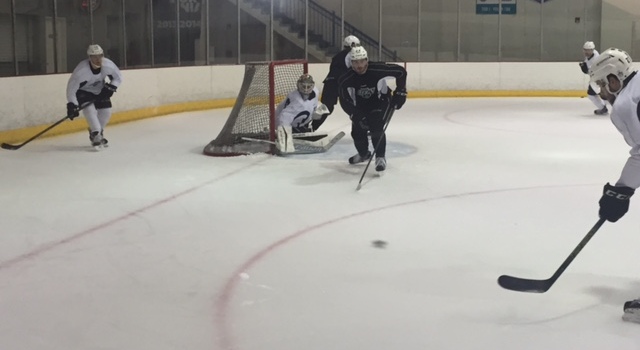 Some quick notes from a quick 11:15 a.m. PT skate at Center Ice in Ontario. Today’s work was limited to about 45 minutes.

–The practice was the team’s last before departing via bus to San Diego tonight (yes, they’ll be traveling during Game 1 of Kings vs. Sharks). The Reign (43-18-4-1, .689 winning percentage) will face the Gulls on Friday and Saturday in their final games of the regular season.

“I don’t think the outcome, the win or the loss is as important as how we play,” head coach Mike Stothers said after practice. “We’ve had it this year where we’ve played some good games and we haven’t won. We’ve had some games where I thought we didn’t play very well and we either rally late or find a way to win. I think, to me, for us as coaches we want to evaluate how we’re playing going into the playoffs. If you put too much importance on ‘you have to win,’ ‘you have to win,’ if it doesn’t work out that way then the automatic emotion after that is disappointment and you don’t want that going into the playoffs either. Just the fact that who we’re playing should create some energy.”

Who they are playing is San Diego, the Ducks’ AHL affiliate and the only team the Reign have a losing record against this season at 3-5-1-1.

“You want to be playing your best hockey going into the playoffs,” said Sean Backman, the team’s points leader. “This is a good sharpening for the big dance, as they say.”

The overall goal is a full 60-minute game according to Stothers and the team has had success in that department as of late, riding a four-game winning streak.

“To me it’s just let’s go out, play,” Stothers said. “Play the way we think we’re going to need to play going into the playoffs — no matter who the opponent is — and let’s play 60 minutes and see what happens. And if we win, great, and if we fall a little bit short, you know what, at least we know where we need to make some more adjustments.”

Added Backman: “Every game we go in to win, so that’s first and foremost. But I think also as important is playing like we can. I think we’ve seen it the last couple games playing more complete games than we have been the last couple weeks. I think that’s important because in playoff hockey you have to finish games. You cant play 20, 40 minutes, you have to finish games and we’re getting close to being a more complete team as we get to these last two games of the season.”

–It’s down to either the San Jose Barracuda or the Charlotte Checkers as to who will face the Reign in the first round. Here are the clinching scenarios for each, provided by Jason Chaimovitch, the AHL’s communications head:

“It’s kind of nice to know who you’re playing, we’re preparing for both obviously,” Stothers said. “We’ve got what we’re doing to make sure we’re ready for whoever it is.”

San Jose is a more familiar opponent in the sense that the Reign have faced the Barracuda 12 times, going 9-3-0-0. There’s also the irony that the parent club in Los Angeles is facing San Jose in the first round of the Stanley Cup Playoffs.

“I guess you could say maybe we know San Jose because we played them more but it just means they know us better, too,” Stothers said.

The Reign split their season with Charlotte 2-2-0-0. The Checkers play at Lake Erie today at 4 p.m. PT.

“I think any time you start wishing or hoping for an opponent, you’re setting yourself up for failure,” Stothers said. “Whoever deserves to be there, OK, let’s go, let’s play.”

–Forward Spencer Watson was signed by the Kings to a three-year, entry-level deal and will report to the Reign.

–Goalie Jack Flinn’s addition to the team was announced shortly before practice began and he participated with the team for the first time. The 20-year-old just wrapped up his junior career (both in the OHL and the QMJHL) and most recently played for the Mississauga Steelheads of the OHL. Flinn, 6-foot-8, went 32-27-3 with a 3.07 goals against average and .905 save percentage. His Steelheads were eliminated last week in a Game 7 against the Barrie Colts in the opening round of the playoffs.

–Defenseman Jeff Schultz was the only player not on the ice as he was given a maintenance day.