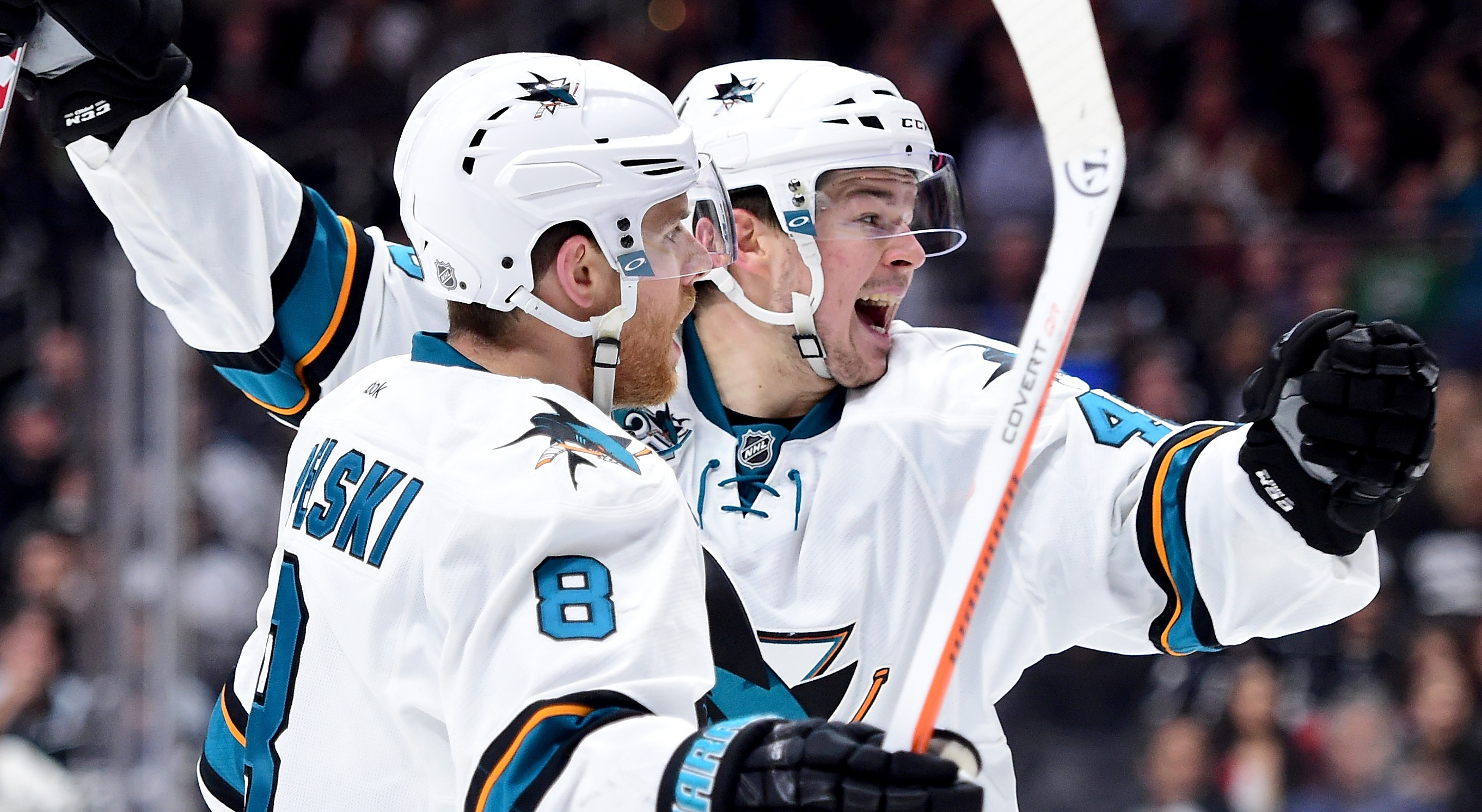 Joe Pavelski, on if the Sharks felt comfortable going into the third period:
Yeah, yeah we feel confident, the biggest thing is we just stick to our guns, we keep rolling four lines out, we keep playing and doing a good job pressing, not sitting back if we’ve got the lead, or it’s tied, or it’s down, we’ve played the same way. So that’s important, not get too high, just focus on what we need to do.

Pavelski, on his game-winning goal:
The faceoff, I was just kind of wrestling around with Kopitar there, [Justin Braun] has it, the only play really was to send it down, so I was just able to spin off there at the last second, as I grab it it kind of pops up on edge and sticks to my stick there a little bit. I didn’t know it went in to be honest, I heard it hit the post and I see one guy’s arm going up, and then I see Quicker’s arm reaching behind him, and I’m like ‘oh my god I hit the post, it might be laying there’, and it’s a goal, the emotions were going, it was good to see, it was just a good way to start the period and get back on it.

Pavelski, on the Sharks’ resiliency:
That was the story of the night, I think, was the strength of our guys to not change the way we were playing and get back on it, we had chances, we hit posts, we had rebounds, our power play had momentum, it’s just good to see guys step up at those moments.

Burns, on winning the first game on the road:
It’s great, maybe you enjoy it for two-three slices of pizza here and move on, maybe four slices of pizza.

Burns, on bouncing back from multiple deficits:
That’s just a California series I think, it’s going to be close, it’s going to be grinding all game, weird goals kind of both ways. It’s a good game, it’s close, it’s what we expect, there’s going to be more of them, so you just kind of go with it, you feel good, you eat a couple slices of pizza, sleep, come back tomorrow.

Martin Jones, on the win:
Anytime you get a win it’s huge, we’ve got a long way to go though.

Jones, on the Kings scoring first:
That’s not something you want to get in the habit of, they’re a tough team to come back on, but it was great to battle back and get the win there.

Jones, on being comfortable late in games on the road based on regular season success:
This team’s been good in the third period all year, whether we’re up, down, so it’s a good sign, but like I said, we’ve got a lot of work ahead of us here.

Jones, on if he was nervous going into his first-career playoff start:
Yeah you’re always nervous I think, you’re lying to yourself if you’re not nervous, but I felt more comfortable as the game went on, and I felt like I was getting more settled in.

Jones, on how they kept the Kings out of the net during the final moments:
A lot of blocked shots, the guys have done a great job all year, I’ve said it over and over, but it goes to show there in the last minute.

Peter DeBoer, on the win:
I think we’re a confident team. Obviously we have a lot of respect for LA and the building that we’re playing in, but there was no panic there. I liked our response. We fell behind one nothing and we fell behind three-two and both times came back with big responses. I think we’re comfortable on the road and we played a real good road game.

DeBoer, on Joe Pavelski’s performance:
He’s our captain for a reason. He scores a lot of key goals, he leads the league in game winning goals and he’s been clutch like that for us all season.

DeBoer, on entering the third period tied:
We feel confident. The biggest thing is that we stick to our guns. We keep throwing four lines out, and keep playing. We’ve really done a good job pressing, and not sitting back whether we have the lead or we’re down, we’ve played the same way. That’s important; not getting too high, and just focus on what we need to do.

DeBoer, on the Sharks’ resiliency:
It’s the story of the night, I think, just the strength of our guys. We really didn’t change the way we’re playing and get back on it. We had chances and hit a few posts, the power play had momentum. They got a short-handed one there. It’s just good to see guys step up at those moments.