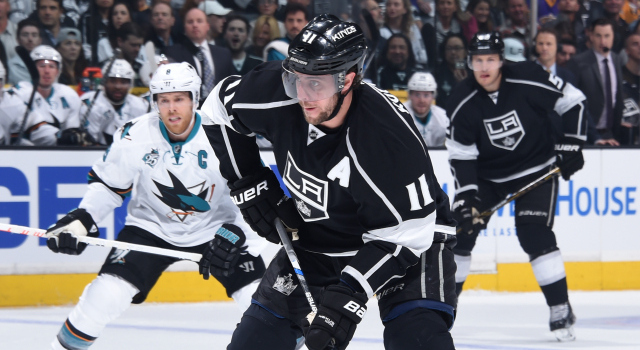 Anze Kopitar, on what the Sharks did well:
I think it’s more so what we weren’t doing. … I don’t know what the shot total was but I don’t think it was nearly enough to create seconds chances off the initial shots.

Kopitar, on going down 1-0 in the series:
Obviously it’s not ideal to lose the first game, especially at home. We’ll correct a couple of stuff and we’ll get back at it on Saturday.

Kopitar, on special teams:
We lost the special teams battles. We first and foremost took too many penalties. You just can’t give them too much momentum. We have to do a better job of staying out of the box, and that our mistakes don’t result into goals against.

Kopitar, on how to stop the Sharks’ top players:
Limit their time and space. Make sure we check them correctly. At the same time make them defend, too. We didn’t do a good enough job, we have to correct that.

Trevor Lewis, on the game overall:
I think we started out good and kind of let up the pressure and they kind of got their forecheck going and we gave them some momentum there in the second. Third we got scored on early there and we couldn’t get another one.

Lewis, on the San Jose power play:
Their power play’s good. They’ve got a shooting mentality and they shoot everything so we’ve just got to make sure we’re in the lanes and making the right reads.

Lewis, on how to slow on the Sharks’ top players:
We’ve got to wear them down, it’s a long series. We’ve got to be physical on them and make them play in their own end.

Lewis, on the play of former teammate Martin Jones in net:
He’s a good goalie and he did make some big saves but I think we can do a better job of getting more pucks at him and taking his eyes away.

Lewis, on his shorthanded goal:
I knew they were tired here and Kinger was talking to me, telling me I had a little time and I looked up and saw we had a 2-on-1. I saw he was driving the D and I just kind of pulled it and shot it.

Lewis, on Hertl’s goal shortly after his shorthander and if it was frustrating:
Yeah, definitely. After we score we need to be better and keep the momentum on our side.

Dustin Brown, on what he took away from the game:
We weren’t very good. We just weren’t very good. Everyone can be better so it’s just a matter of — again, this is the time of year where you can’t dwell on it. Learn from it and go on and we’ve got a lot left in us. Tonight was not how we wanted to start the series but we have a chance to regroup and even the series on Saturday.

Brown, on the amount of penalties the Kings took:
There was a lot of penalties. They’ve got a really good power play and we’ve just got to be aware of it. It’s hard to kill that many penalties.

Brown, on the momentum shifts:
It’s one of those things where it’s a back-and-forth game. I think ultimately we get up 3-2 on a shorthanded goal, that big momentum goal was that goal we gave up right after. I think we had all the momentum on a penalty kill goal.

Brown, on what the Kings need to do differently:
I think we just can play better. Once the playoffs start it’s kind of a new — you hit the reset button. I think we just weren’t sharp. For us to get in on the forecheck and play our game we need to pass the puck well. We weren’t moving it quickly and we weren’t moving it crisply. That I think played a big factor for us.

Brown, on if they need to change anything for Saturday:
I think we need to change a lot of things. It starts with having everyone ready to go. Like I said, just being sharper and executing better.

Brown, on the penalties throwing off the game:
It was a weird rhythm of the game just because of how many penalties they’re calling. But that’s, both teams had to deal with it and again we’re taking too many penalties on our side.