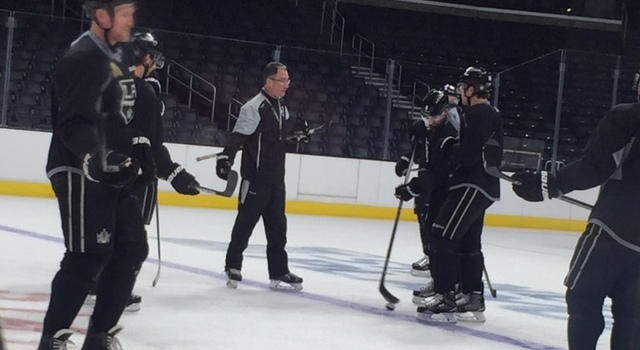 Good morning from Staples Center, where the Kings have skated, met with the media, and held a Darryl Sutter press conference. At the moment, the San Jose Sharks are currently skating, and more reports will come following their practice. A few notes: Tonight’s game will be broadcast regionally on FOX Sports West and nationally on CNBC, and in Canada on CBC and TVA Sports. Puck drop is scheduled for 7:45 p.m. The referees are Brad Meier and Kevin Pollock, with Mike Leggo serving as a standby, and the linesmen are Brad Kovachik and Ryan Galloway. The national anthem will be sung by Laporsha Renae; I’m told that Pia Toscano will return on Saturday.

The Kings emerged from their tunnel shortly before 10:30 a.m. and aligned as such:

-Obviously, Jonathan Quick left the ice first and is projected to start.

-As for the lines and pairings, they’re more or less what we expected after yesterday’s practice. Alec Martinez took the first rotation alongside Rob Scuderi but also took several rushes alongside Jake Muzzin, so there’s the chance, based on game situations, that he could jump up alongside his more familiar defensive partner should there be a desire or need. Marian Gaborik skated with the team but did not take part in initial rushes and remained on for extra work with Nick Shore, Jamie McBain, Matt Greene and Jhonas Enroth. That’s likely your non-game group right there, with Enroth serving as a back-up.

-I’ll have a notebook coming up in a little bit that will look at the Kings’ role players, amongst other topics, but here’s Dustin Brown talking about why Trevor Lewis is constantly viewed as an unsung hero for this Los Angeles team: “I think a lot of it just comes from his attitude, really. It’s not necessarily anything anybody else will see except for the guys in this room, really. He gets asked to do a lot of different things whether it’s PK or fourth line or first line. He can kind of fit in anywhere and give a jump start or fill a hole when we need it. In saying that ‘utility-type player,’ it’s just his attitude that he brings to it. You never see him sulking or complaining. He just kind of goes about his business and tries to help the team. Again, it’s probably something more in the room where he’s always there for you.” 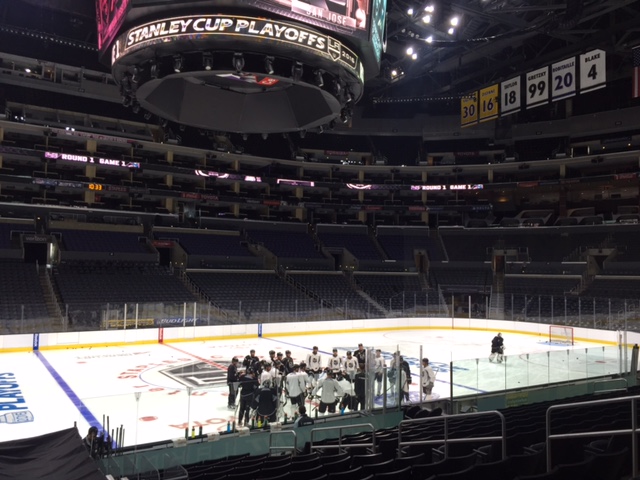