Wait nearly over for LoVerde from trachea injury 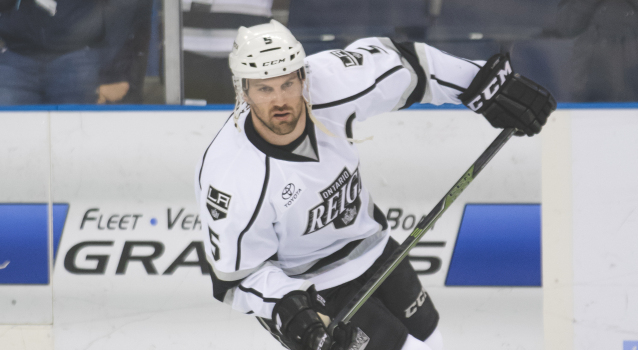 Vincent LoVerde was having trouble breathing. He had just taken a high stick along the boards. This was back in the third period of a March 16 game in San Jose, the last contest the Reign captain played in.

“I just remember a stick coming up, kind of hit me in the throat region and couldn’t catch my breath for a little bit there. Didn’t have much of a voice for a few days but it’s obviously feeling a little bit better now,” said LoVerde on Wednesday, still with a scratchy voice.

In that game Ontario would score on the ensuing power play but be forced into overtime against the Barracuda after allowing a late goal. Then it was no other than LoVerde, who stayed in the game despite the effects of what would be eventually diagnosed as a cracked trachea, scoring the overtime winner in a 3-2 victory.

“At the time, part of it’s the adrenaline, part of it’s, I’m not sure. I couldn’t really breath much, it’s a close game … was a tie game at the time and just wanted to keep playing and stay in the game for my teammates,” LoVerde said.

That game-winner was LoVerde’s fourth of the season. He still leads the league in that category among defensemen. Despite his heroics, from there the situation only got worst.

“I came home after the game, couldn’t sleep much,” LoVerde recalled. “Was having some chest pains and whatnot. Flew home the next day and then from there I went to the ER because we weren’t sure what it was. Ended up having a cracked trachea and was in the hospital for two or three days.”

Days after the San Jose game and once LoVerde’s ailment was known, one thing was a bit surprising to head coach Mike Stothers — that being the extent of the injury — but something else was of no surprise to him.

“Turns out that there’s a little more to it than we even recognized,” Stothers said after a March 18 game, the first LoVerde missed after playing in the first 55. “So there’s a guy that finishes the game and scores the game winning goal in overtime. So that tells you everything you need to know about your captain. But, he’s going to need some time. But he’s OK, but he’s going to need some time.”

That time off is nearing its end after LoVerde’s missed 11 games. Now the light at the end of the tunnel is there for the All-Star selection who is still fifth on the team in scoring with 11 goals and 21 assists for 32 points.

“Right away obviously wasn’t doing much but after a little while could gradually — after a week or so — could start working out basically depending on how much chest was feeling, lungs were feeling, how my breathing was,” LoVerde said of the recovery process. “It was maybe like a week I was working out, riding the bike. Been in non-contact for the last week or so. I feel great, ready to go, excited to hopefully play this weekend.”

This weekend will be the time, at least according to Stothers. LoVerde, a 5-foot-11, Chicago, Ill., native, will return this weekend when the Reign face San Diego on the road Friday and Saturday on conclude the regular season.

“It’s tough,” LoVerde said of the struggle during the time off. “Stuttsy alluded to it after one of the pregames about being stir-crazy. Hanging out with Biss but truthfully you do get a little stir-crazy.

“You get a little removed from hanging out with your teammates and your friends and you really start to miss it, you truly do. Yeah I was going a little bit of stir-crazy especially on the road trips and you have lots of down time. It was kind of good, I was able to watch the games and pick up a few things and pick up some stuff that I can hopefully add to my game. There’s always positives to every situation. It wasn’t great, it wasn’t ideal, but I was able watch some games and pick up a few things so it was good in that aspect.”

It’s better though for the Reign to have their captain and for the captain to be with them. In his absence no other player has donned the “C” and the wait has been long enough.

“If it was my decision I would have played three weeks ago, probably. But probably for the better it wasn’t,” he said.