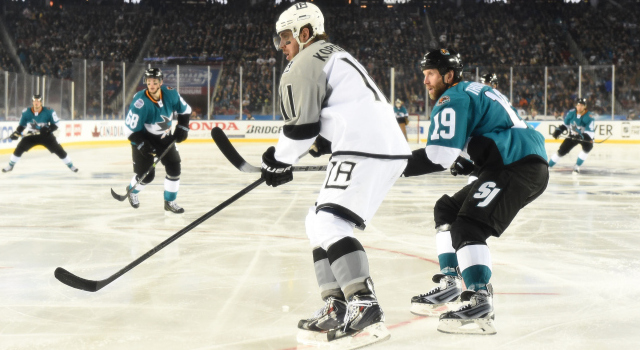 Anze Kopitar had some heavy liftin’ in the 2014 postseason.

After helping to engineer the resuscitation of Los Angeles’ playoff lives – he scored the game-winning Game 7 goal in San Jose – he emerged from the first round match-up only to be rewarded with subsequent center battles against Ryan Getzlaf and Jonathan Toews. When the dust had settled after a month and a half, he was ticketed to the Stanley Cup Final, and, ultimately, towards the second championship in his decorated young career.

Despite the remarkable competition, 54.4% of shot attempts were funneled towards the attacking net while he was on the ice that postseason. And despite the narrative, he wasn’t matched exclusively against Thornton. With a trip to the old memory bank (and a visit to War-on-Ice), one recalls that Kopitar actually saw more even five-on-five time against Logan Couture (42:44) than Thornton (26:59) in that series. Jeff Carter (28:31) and Mike Richards (26:19) also shared the responsibilities of going head-to-head with Thornton.

“I think with me and Thornton we’re, I’d say, fairly similar type of players, more playmakers and more looking to distribute the puck,” Kopitar said. “I just think going out there, playing my game, and in the process [I’ll] obviously try to shut him down. I also think if our line is on top of it, we’ll be playing with the puck which means they’re going to chase it and that’s obviously good for us.”

As a team, San Jose hasn’t quite been as proficient in puck possession as they were in 2013-14, though they’re still well in the black. And Thornton, whose 56.3% Corsi-for ranks 25th in the league (Kopitar’s 57.5% rate ranks ninth), saw his even strength point haul raise from 31 from a season ago to 46 this season. He’s seen as a dark horse contender to become a Selke Trophy finalist and recorded his first point-a-game season – he had 82 points in 82 games – since doing so over five straight seasons between 2005 and 2010.

“We see him five times a year but, for me, what I got from playing against him over the past 10 years, he always plays hard and he’s one of the leaders on their team,” Kopitar said. “He’s the one guy that gets circled before the game that you’ve got to watch out for and I’m pretty sure that’s not just by our team that’s by everybody else, too. Got to pay attention to it. If he’s different this year, I don’t know if his points are up and everything. Obviously, good for him, but now we’re going to try to shut him down.”

Los Angeles did so over the final four games of the 2013-14 series, holding Thornton scoreless and depressing his plus-minus to a minus-six after the future Hall of Famer recorded three points in the first three games. But Kopitar also knows that if it’s not Thornton, it’s Logan Couture, it’s Tomas Hertl, it’s Patrick Marleau, and just as impressively, 38-goal man Joe Pavelski, who form such an effective attack.

“Obviously they all play hard, they all have a lot of skill, first and foremost,” Kopitar said. “And they have good speed, too. Every time those guys are on the ice you just got to be aware of them. … It’s really not rocket science. You’ve got to go limit their time and space and play them as hard as you possibly can.”

Anze Kopitar, on whether he talks to Joe Thornton on the ice:
I wouldn’t say we’re chatty out there. It’s just a quick hello, usually at the start or something, you know. But nothing, we’re not going to talk about personal life or anything. I’ve talk to him before, yes, I wouldn’t say we’re friends but we’ll talk, just not on the ice.

Kopitar, on the 2014 playoff series:
That happened two years ago. That’s past us. … I believe they didn’t make the playoffs last year either, right? [Reporters: No.] Both teams had a pretty bad season last year so what happened two years ago it doesn’t matter, it’s not going to affect [this series]. What’s going to matter is who’s coming out and being on top of their game and just win four games, that’s what it is.