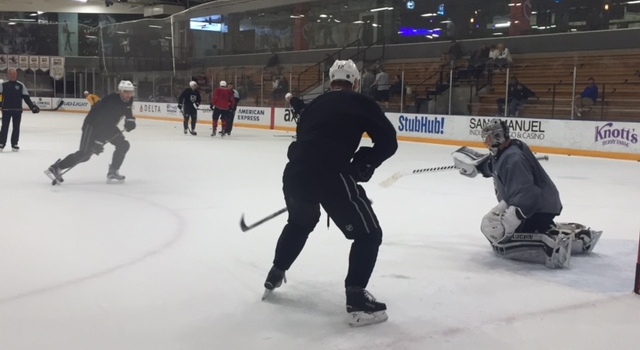 Good morning from one of the bunkers at Toyota Sports Center where Darryl Sutter is about to meet with the gathered media. Speaking of which, there have been a few new additions as Pierre LeBrun of ESPN.com has commuted to California to cover the Kings-Sharks series, as has NHL.com’s Shawn P. Roarke. There should be no shortage of excellent coverage from the local and national media.

-The Kings opened their practice with rushes and aligned as such:

-There was a touch of movement in the team’s alignment as Alec Martinez jumped up into a partnership with Rob Scuderi after having skated in an extra pairing alongside Matt Greene yesterday. This may very well mean nothing; Martinez, who missed the final week of the season with an undisclosed injury, is among those who may or may not be ready at the outset of this best-of-seven series. Though Marian Gaborik took the first loop up and down the ice with Andy Andreoff and Trevor Lewis, that’s no firm indication that he will draw into Thursday’s game. We’ll have a better sense of who should be and who may not be ready for Game 1 when the team skates Thursday morning at Staples Center.

-Yes, that’s correct. Staples Center. For those who may have forgotten, the team holds morning skates on game days downtown during the playoffs.

-As for the work undertaken at today’s practice, there were rush and flow-type transition drills followed by drills that featured in-zone battle components. That was followed by special teams work, and as players left the ice, individual skill retention-type drills. In other words: A normal practice was experienced by all.

-There’s lots more to come today. I’m still sifting through the 30 minutes or so of Dean Lombardi from yesterday and will post a few more of his sentiments. I also have a Kopitar-Thornton story and a Lewis-King-unsung-playoff-performances story that I’m looking to get out today, so there should be a regular afternoon on LAKI. Stay tuned, Insiders. 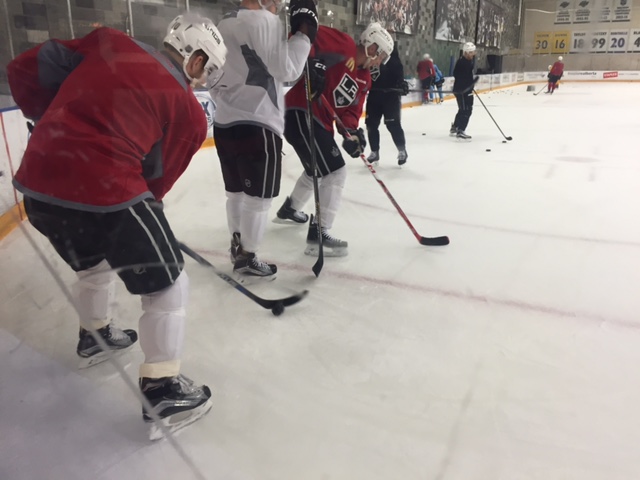