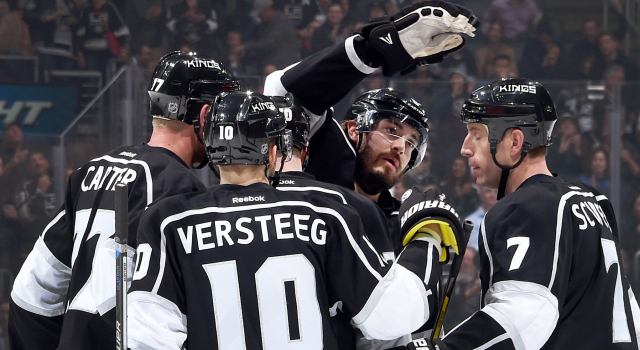 The west is wide open, or so stands the general sentiment that there’s no clear-cut favorite to advance out of the Western Conference.

“I think it’s been wide open like that since for the last whatever,” Dean Lombardi said.

‘Whatever’ could be construed in a number of ways. Since expansion? Since the divisions realigned? Since the salary cap tightened its belt on recent champions Los Angeles, Chicago and Boston?

In any interpretation, there’s no real consensus on who the favorites are. The Kings and Blackhawks, two feasible picks to emerge from the battleground of the Pacific, Mountain and Central Time Zones, do have some personnel-related questions and may not feature as airtight of a defense as several previous incarnations of their championship-caliber teams.

But two months before Chicago ably navigated a course towards its third championship in six seasons last spring, Los Angeles played a meaningless 82nd game at home as the result of a failed season within a championship window in which the team dealt with an array of challenges that weren’t as extant in its previous two Stanley Cup runs. Somewhat contrary to the first 44 years of team history, it was a strange feeling having run out of critical games in early April.

On Thursday, the two teams whose seasons ended on the same day and at the same arena last season will reconvene for their fourth playoff series in six years, a span in which Los Angeles will be challenged by both an able opponent and an evolved set of circumstances from their previous postseason meeting.

“I think the biggest difference is expectations now,” Lombardi said. “I think you have a totally different animal. The first time we snuck up on people, we run the table. The next time they do it the hard way, and last year we saw what happened with two Cups under their belt. So clearly we lost some clutch players, but it was – I don’t want to say ‘by design’ – but at some point we knew we were going to turn over the reins to the core that came through the system with our top players. But with it becomes expectations, and that’s a very different animal. So, to me, that’s the biggest difference. But that’s where you want to be. You’re not only trying to build a team, you’re trying to build a culture. Those are two massively different things. I think this is a huge challenge. So to me, that’s the biggest difference. That’s a mindset.”

That culture does exist to a greater degree in Los Angeles than it does in San Jose, and while the Kings’ championship pedigree serves as an intangible advantage, it is also something that the team, through what we’ve heard from several encounters with Lombardi this season, has had to learn to deal with. There’s no more sneaking up on anyone.

On a more concrete evaluation, the Kings have also been had to rework some of their personnel on the back end. Lombardi praised the work undertaken by Luke Schenn and center Vincent Lecavalier and was appreciative for their ability to fit in with the rest of the group. He also bullishly said that it was “no secret” what the team would receive from Rob Scuderi, who has been a better fit with L.A. than he was in Pittsburgh or Chicago.

“You talk about the difference personnel-wise other than attitude, look at those teams that won in Chicago when we went to the conference finals,” Lombardi said. “They’re pretty much able to roll three sets, right? Three pairs. And that’s the way it was designed. And if you look at Chicago, and the year we beat ‘em, and the year they beat ‘us, they had the same thing. Right? Leddy was Martinez. Right down the frame, it was almost like a carbon copy. Keith, Doughty, Seabrook, Muzzin. It matched up entirely. Both teams could roll three sets. Chicago started getting hit last year. They lose Oduya. They’re doing the same thing. Funneling guys in, Keith has to play a lot of minutes just like Doughty has to play a lot of minutes.”

That hasn’t always been the case for the Kings this season, who are only a year and a half removed from Slava Voynov’s domestic violence incident that resulted in the self-expulsion of a team-developed player who had assumed a front-and-center role on prior Stanley Cup runs, especially the most recent one.

That, bound together with Willie Mitchell’s 2014 departure, Robyn Regehr’s retirement and the injury that shut down Matt Greene one week into the season, have Los Angeles relying on a defense that has evolved from 2014.

Lombardi sounded confident with the levers he had pulled to bring about his current mix.

“Top-three defensemen do not grow on trees, and when you see one move, it’s very unlikely,” he said. “It’s either the Jack Johnson-Carter deal, or like what you saw with Nashville and Columbus (with Ryan Johansen and Seth Jones) there. So I think we’ve done as well as we could to patch that up. By the same token, too, Muzzin, Marty, Drew are older. I think Schenn’s fit in well to give us that smashmouth that Greener’s given us, and Vinny’s been really good in that three-hole, as far as I’ve seen.”

Stung by the result of trading defensive prospect Roland McKeown and a first round draft pick for 16 games of Andrej Sekera, Lombardi chose not to fulfill any homerun approach towards this year’s trading deadline and surreptitiously obtained four players – Kris Versteeg and Lecavalier up front, and Schenn and Rob Scuderi on the blue line – who’ve combined for seven Stanley Cups and have been valuable additions.

With Greene’s injury, Voynov’s void and the caution towards overworking and wearing down Drew Doughty, the moves to reinforce the defense were the most needed, and that position will be under more scrutiny this spring than it had in past years.

“You’re trying to hold that fort back there, whether we like it or not,” Lombardi said. “It’s like pitching.”