How much progress have the injured players made? 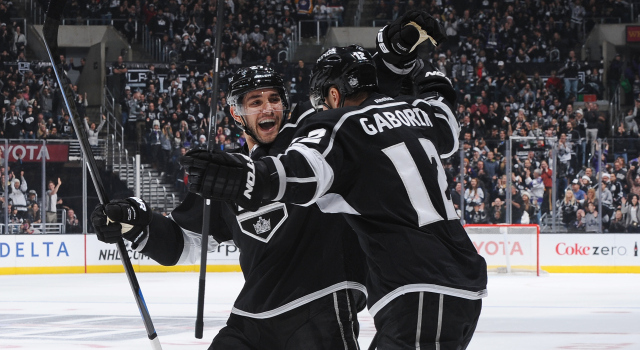 Marian Gaborik, Alec Martinez and Matt Greene have taken steps towards returning to game action for the Los Angeles Kings, though because it’s the time of the year where injury information isn’t readily shared, there weren’t any clear and concise updates on whether they’d be able to play early in the Western Conference Quarterfinals series against the San Jose Sharks.

“Not available,” Sutter said of Gaborik when asked whether he’s “trending” towards returning to action. Asked whether that applied to the entire series, he responded, “I’m not God. I’m not a doctor. I’m closer to a veterinarian than a doctor.”

With a swing and a miss, no follow-ups were asked about Martinez or Greene, the latter of whom indicated two weeks ago that he wasn’t yet nearing a return. Jordan Nolan, who underwent back surgery in March, isn’t close.

Martinez, deemed day-to-day by the team with an undisclosed injury, politely declined to answer questions about himself and preferred instead to speak on behalf of team as a whole. Gaborik, though, spoke about his process of returning from a Grade 3 knee sprain suffered in a collision with Dominic Moore of the New York Rangers two months ago today. It was his first time chatting with multiple members of the media since his injury.

“I was looking forward to this skate and this showed me that I don’t think I have a far ways to go,” he said. “That’s how I feel. It was a good first practice and [I’m] looking forward, again, tomorrow to do some different things out there and just ramp it up, and hopefully be ready to go soon.”

Forwards were color-coordinated by line on Tuesday, and that Gaborik wore the same colored practice jersey as Nick Shore, who didn’t play in seven of the last eight games, and Nic Dowd, who was assigned to AHL-Ontario with Kevin Gravel in the afternoon, is an indication that he’s getting closer but not quite at the level where he needs to be to return to game action. Hence, Darryl’s “not available” decree. Martinez was paired with Greene in defensive rotations as the top six defensemen didn’t change from Sunday’s regular season finale.

“I think [the next step in recovery is] battles, getting some contact, especially in the corners and doing the small stuff around the net,” Gaborik said, “and just kind of have some bodies on my back and to really feel that to get the confidence under me that I feel strong going to battles, going to corners and going out of the corners, pushing out, getting off the wall and going to the net and just those small, little explosive things. Just those battle drills down low.”

“I think, like I said, it was good, another step in the right direction today and [I’m] looking forward to another one and to play soon, hopefully.”

That’s a normal and expected desire at this point in his return. It also represents a step forward in the process of evolving from working out and skating on his own to someone, as he showed today, capable of rejoining practice in a somewhat limited capacity.

General Manager Dean Lombardi was also asked when Gaborik could return, and responded, “I don’t know,” before going into greater detail of the process.

“I was shooting here for this week, but I think a lot of those injuries, you’ve got two issues. One, being physically stable and [two], the mental part, going out there and getting hit, and I think we’re probably getting to that point now because we don’t have time for the ginger part, to go down there and get hit and see if it’s OK. We’ve got to hit the ground running, so I’m not so sure unless he’s ready to go out there and do it. Structurally, like I said, I think we’re close. But it’s no different if he’s got a shoulder injury. He’s obviously got to get hit a couple times, and then he says, ‘whoa, this is OK.’ Well, we ain’t got time for that.”

Martinez, meanwhile, spoke on behalf of the team’s ability to secure a playoff spot early and earn home ice advantage despite some inconsistent results over the final three weeks of the season.

“Obviously you want to be playing your best hockey going into the playoffs,” he said. “I think there was obviously a bit of a drop off after we clinched and I think that’s fighting human nature but that said, you’ve got to be playing playoff hockey before you even get to the playoffs. I think that there are some things that obviously had to be addressed. There are things that we can get better at. Always, no matter where you are at the point of the season or even in the playoffs – if you’re playing in the third round, or you’re playing in the final – you’re constantly trying to get better. So there are some things I think we’ve got to shore up. San Jose’s a really good hockey club and we’re very familiar with each other, so it’s going to be a battle.”

Marian Gaborik, on whether rehabilitation can get monotonous and boring:
Yeah, it’s boring, but it’s part of it. You have to go through it. Everybody has to go through it coming back from injury, just skate on your own and doing drills and just feel good again. Definitely, it was good to get out with the guys and feel part of it again and, like I said, to have traffic around me, too. To do some reaction things. When you skate on your own everything is kind of under control and you know what you’re doing pretty much all the time. When you’re out there [with your teammates] you have to react to certain things. That’s a good test to be [out there] for the first time.

Gaborik, on how the injury felt when it happened:
I could have sensed what’s wrong but I didn’t know to what extent. I knew it was pretty bad but quite frankly I thought it was going to be worse than that the way it felt. Here we are and I’m back on the ice with the guys and put everything behind me and just looking forward.

Alec Martinez, on how the Kings can start anew in the postseason:
I think it’s two-fold. I think one is our style of play and the other side being the leadership group and the character in this room. The experience of having gone through it before. But that said, you know, we weren’t there last year so we’ve got a big job ahead of us.

Martinez, on what he remembers from his first playoff game:
Really trying to jog the memory here. Well, I guess my first playoff game was against San Jose. I believe in their building. What were we, maybe a 6-seed that year, and they were a 3-seed? Obviously the intensity ramps up a lot; that said, you’ve got to concentrate on playing your own game. There’s a reason why all 16 teams are in the playoffs and that’s because they’ve been doing something right rather consistently over the course of 82 games. The intensity definitely picks up but you know you’ve got to stay true to your team’s identity and you’ve got to play the way that got you there. [Reporter: After the first shift did it feel like another hockey game or did it take longer to settle in?] Playoffs don’t ever feel like just another hockey game. Like I said, it’s a totally different beast. The intensity. There’s guys doing things that maybe they don’t normally do. You’ve got star players blocking shots, not that star players don’t block shots, but you know what I’m saying. There’s that effort level, the intensity is just a lot higher. Yeah, I guess I can’t really remember to answer your question, but I just know that it’s a revved up environment, for sure.