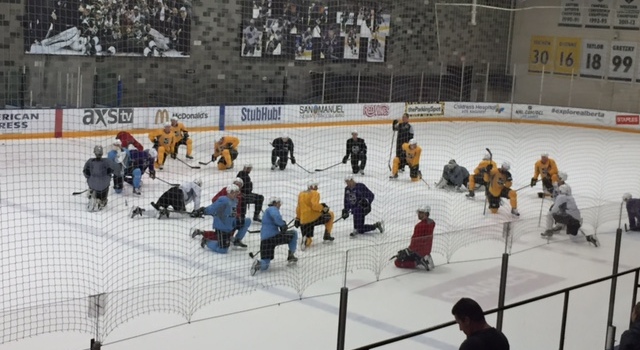 Welcome to the second season, Insiders. After a day off on Monday, the Kings returned to the ice in El Segundo on Tuesday and aligned as such, via color-coding:

-So, Gaborik, Martinez, Greene. All three skated outside of what would be considered “game groups” – the top four lines and top three defensive pairings to take rushes – but that can change in advance of Thursday’s game. We’ll continue to learn more about readiness in Wednesday’s practice and Thursday’s morning skate. I’ll have a few words from the dressing room and Darryl Sutter on the injured players later today. Keep in mind, for Gaborik and Martinez, this is continued progression in the process that can include riding a stationary bike/working out, skating alone, skating with a few teammates after a practice, joining practice in a limited capacity, taking line rushes and joining practice in an accelerated pace, and being cleared to return for game action. Right now they appear to be in between “joining practice in a limited capacity” and “taking line rushes and joining practice in an accelerated pace,” though closer to the latter than the former. Greene’s pretty much in that boat as well.

-As for San Jose, Marc-Edouard Vlasic and Matt Nieto practiced yesterday and are expected back for Game 1. Vlasic should be expected to skate alongside Justin Braun, while Matt Nieto skated alongside Patrick Marleau and Melker Karlsson, according to Kevin Kurz. Assuming Vlasic and Nieto return, the Sharks are healthy.

-I’ll be leaving shortly for a personal appointment that should keep me busy between 11:30 and 1:00, and again from 2:15 to 3:15. Bear with a delay over those times; full reports and Darryl Sutter quotes will still be posted throughout the day.