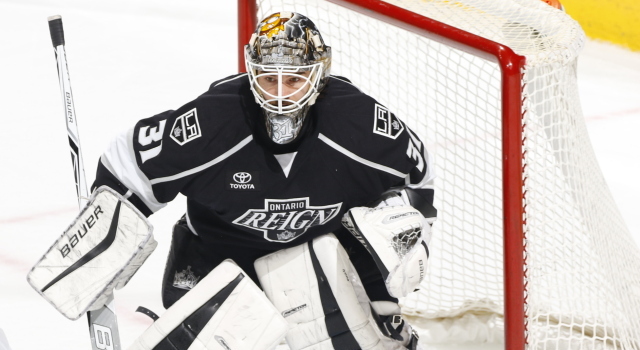 Reign goalie Peter Budaj was named as the CCM/AHL Player of the Week for the week ending on April 10, the league announced on Monday.

Budaj finished 3-0 last week, helping his team rebound from a three-game losing streak. Last Wednesday in a 4-1 win at Stockton Budaj stopped a season-high 46 shots. He followed that with another two wins in a home-and-home against Bakersfield. On Friday in a 4-1 win against the Condors in Ontario, the 33-year-old stopped 30 shots to earn his 40th victory, becoming the second goalie in league history to reach that mark in the last 50 years. Saturday he made his 21st straight start in a 4-2 victory in Bakersfield, making 31 saves and holding the Condors scoreless on a two-minute 5-on-3 late in the second period.

This marks the first time this season that a member of the Reign won the weekly award.

The Slovakia native, in his first season with the Kings organization, had this to say on Saturday following his milestone win:

“It feels great. I’m very excited and very thankful. … I’ve been having a very good season but it’s not just a reflection of me. It’s a reflection of the whole team, the way we play, the system that we do, the hard work that the guys put in front of me blocking shots, the little things. I’m very excited that I was able to achieve this. It’s a great honor representing not just me and my family but also our organization and everything else. It’s really good, but I just want to say thank you to my teammates and the coaching staff and everybody else to believe in me and giving me [the] chance to play that many games and being able to do what we did.”