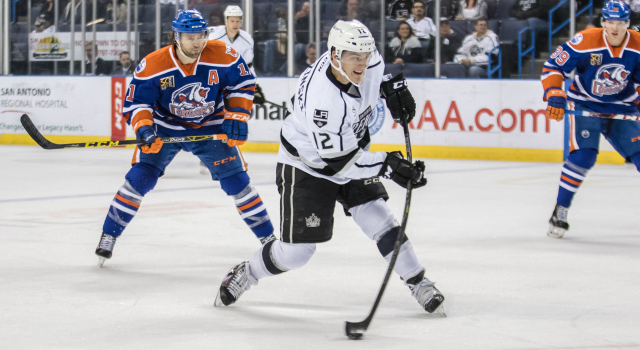 Reign game breakdown
At times it may not have been pretty, but as the regular season nears its end the Reign (43-18-4-1, .689 winning percentage) have now won four in a row after coming out with a grind of a 4-2 victory on Saturday night in Bakersfield. Jonny Brodzinski gave the Reign their first lead of the game at 1:21 into the third period. Each time the Condors took the lead, the Reign managed to answer back. The Condors’ Josh Currie scored on a 2-on-1 in the first period and a goal by Justin Auger followed as he ditched two Condors defenders to score from the left circle. When Philip McRae put the Condors ahead again in the second period, Adrian Kempe beat goalie Ty Rimmer five hole as the Reign finally converted on their fourth power play chance of the evening. A successful 5-on-3, two-minute penalty kill late in the second set the stage for Brodzinski’s go-ahead goal. Peter Budaj made 31 saves for his 41st win. With the loss the Condors (28-28-7-2, .500) were eliminated from playoff contention.

Three stars
–Jonny Brodzinski – After hitting two posts in the first period, the second initially being ruled a goal on the ice and then retracted upon review, Brodzinski made due in the third period. When a Nick Ebert shot left a long rebound in the high slot, the rookie out of St. Cloud State took it, turned and fired high, beating Rimmer. It was Brodzinski’s 15th goal of the year. He also grabbed the secondary assist on Kempe’s tally.
–Adrian Kempe – There wasn’t much to Kempe’s celebration after his goal, but maybe that’s because it was just a relief for the Swedish rookie when he ended his 10-game scoreless streak. Kempe got the puck uncontested in the right circle and took his time before sneaking the puck through Rimmer. Head coach Mike Stothers applauded Kempe’s recent play afterwards saying this via text: “Kempe has been more physical, and hanging around the dirty areas for better opportunities.” The Reign can only hope that this goal can be the segway to more production, the kind that saw Kempe put up an impressive eight goals in last year’s Calder Cup run.
–Peter Budaj – In the pipes on back-to-back nights and making his 21st consecutive start, Budaj was beat on one of the seven shots he faced in the opening period. And although he was left high and dry on a defensive breakdown that led to McRae’s goal, Budaj was in typical MVP form on the 5-on-3. He robbed both Matt Ford and Anton Slepyshev from nearly the same spot, in tight and to his right, coming across for two incredibly pretty saves to keep the score locked.

Turning point
Put the spotlight on the 5-on-3 the Reign were forced to get through in the last four minutes of the second period with two of their top PKers (Jeff Schultz and Andrew Crescenzi) in the box. Ontario was a perfect 4-for-4 on the penalty kill.

Stat fact
–8 – Shots on goal for Sean Backman, who’s been held without a goal for seven games.

This and that off-ice
The Texas Stars clinched a playoff berth with Charlotte’s loss to Milwaukee on Saturday. … Both C Nic Dowd and D Kevin Gravel were healthy scratches in the Kings’ regular season finale on Saturday in a 4-3 SOL to Winnipeg.

Next up
The Reign have a recovery day Sunday before getting back to work. They’ll face a tough rival in San Diego next Friday and Saturday on the road to close out the regular season.