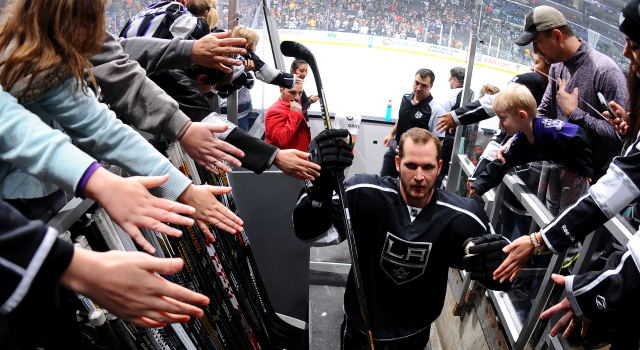 -With the shootout loss, Los Angeles fell to 12-5-6 all-time against the Winnipeg franchise, a record that includes a home mark of 7-0-4. The Kings finished 1-1-1 against the Jets for the second straight season.

-In the race for the Jennings Trophy, Los Angeles finished with 195 goals against. Washington leads with 191 goals against, followed by Anaheim at 192. The Capitals and Ducks play tomorrow.

-Los Angeles fell to 31-5-1 when leading after two periods.

-Barring a +8 performance Sunday by Evgeny Kuznetsov, Tyler Toffoli will finish with an NHL-best +35 rating, followed by Anze Kopitar at +34.

-Andy Andreoff scored his eighth goal of the season and reached the 10-point mark for the first time in his career. He has five points (4-1=5) in the last eight games.

AS VOTED BY THE MEDIA

AS VOTED BY THE KINGS PLAYERS

AS SELECTED BY THE KINGS CARE FOUNDATION

AS SELECTED BY THE KINGS HOCKEY DEVELOPMENT DEPT

AS SELECTED BY THE KINGS BOOSTER CLUB

Vincent Lecavalier for Masterton Memorial Trophy (as selected by the Los Angeles chapter of the Professional Hockey Writers’ Association).

The Kings are scheduled to hold an off-ice workout at Toyota Sports Center at 11:00 a.m. on Sunday, April 10.