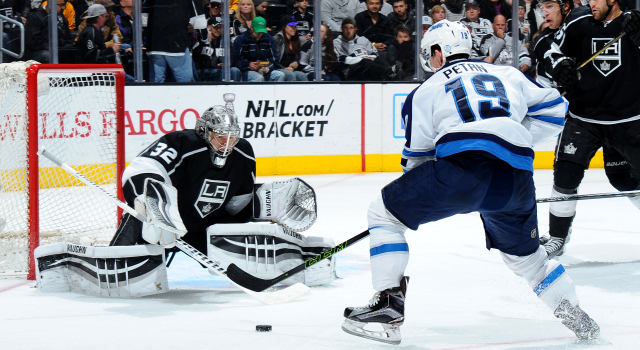 On surrendering a 3-0 lead in a shootout loss:
We got a point. I think that some of our top guys, being four-in-six, didn’t have the gas to be able to sustain it.

On whether the result was based more on Winnipeg’s push or Los Angeles’ collapse:
You know, I told our players they were playing their last game of the year and they’ve got lots of juice and they were playing almost a shinny game out there. I think our top guys kind of got caught up in that and ended up on the ice for goals against.

On whether it’s “frustrating” not knowing yet who they’ll face in the first round:
I think we did our job the other night. We knew coming into today that we were going to play either Nashville or San Jose, and hopefully had enough in the tank to get the other point.

On whether he’ll watch Sunday’s Ducks-Capitals game:
No, I’m not really a Ducks fan. I’m sure there are some here. Some people in here are, but I’m not that crazy for ‘em.

On whether a division title matters:
Obviously, finishing first in your division, number one coming in to tonight, it’s way better to be first, second or third. I think there are 14 teams that would just love to be in our position, and in our division there’s what, four, five, six, seven that would just love to be in that position, too. Just to think that we’ve played 81 games and we’re we’re right there with the team that’s the big favorite and the runaway division winner and all that, so we did a hell of a job just to be right with them.