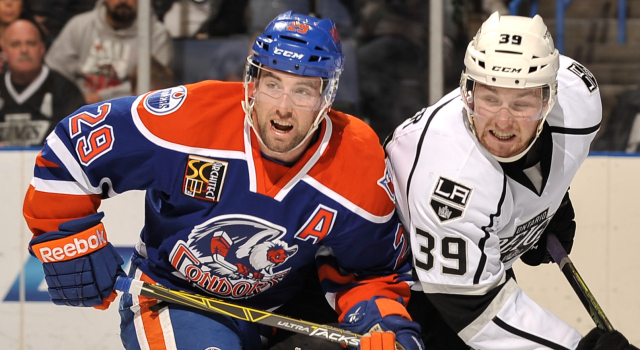 –The Reign won their fourth straight game and improved to 43-18-4-1 and won the 12-game regular season series against the Condors with an 8-4-0-0 difference.

–Kris Newbury registered a goal (ENG) and an assist to extend his point streak to four games (2 G, 4 A).

–Justin Auger put together a nice weekend in the home-and-home against Bakersfield with goals in both games and three points total.

–Jonny Brodzinski’s one goal, one assist performance was his fourth multi-point game of the season.

–Josh Currie keeps the puck on a 2-on-1 and opens the scoring in the first period by beating Peter Budaj cleanly (video courtesy of Sheng Peng):

–Justin Auger eludes two Condors and then beats goalie Ty Rimmer to tie the game at 1:

–Just 1:12 into the second period the Condors take advantage as the Reign can’t get the puck out of their own zone:

–After going 0-for-3 on their first power play tries, Adrian Kempe beats Ty Rimmer five hole on the fourth attempt to tie the game at 2:

Kempe finds some light on the 4v3! @ontarioreign 2 @Condors 2 pic.twitter.com/Oetx3H2ODK

–Jonny Brodzinski finds the puck in the high slot and rips it high by Rimmer for his 15th of the year to give the Reign their first lead of the game 1:21 into the third: