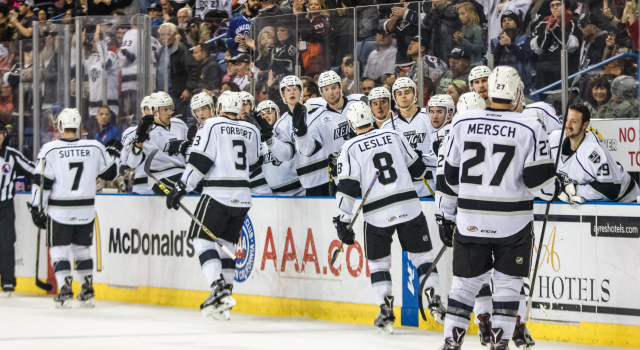 Reign head coach Mike Stothers, on the team’s salute to the fans after the game:
Just something we did last year the last game. We don’t do it after every game but the fans have been terrific all season long for us and it’s the last home game of the regular season so they deserved a little bit of credit, not a little bit, quite a bit for the support, the noise. It’s a great hockey environment when you come into this rink. Don’t read too much into it.

Stothers, on the overall effort:
I thought it was a real good effort. Kind of happy that it’s as close as we’ve been in a while to a full 60 minutes of detail and the little things and playing the right way. You’re playing against a team that’s fighting for their playoff lives. We knew they were going to come out hard and it’s a good team. So, I like the way we played. I was real happy with everybody and all the situations.

Stothers, on if he’s tempted to give Budaj a day off:
Probably give him Sunday, yes. Sunday. [Reporter: OK, a game off, let me rephrase that]. Well, if you start giving guys games off, what message are you sending to everybody? If he gets a day off and somebody else is playing, like say a Schultzy, what message am I sending? It’s a 68-game schedule. We all show up to play 68. I think there’s a good chance that Budes will probably play.

Stothers, on Budaj’s 40th win achievement and his connection with teammates:
He went from zero to 40. That’s pretty impressive. He had a tough year last year in St. John’s and it’s just been an incredible turnaround for him but he’s a good goalie and he deserves what he gets because he works so hard and he’s a great teammate. The guys in the room love him. There’s a big difference when, there’s been some good goalies over the years, they’re not the most popular guys in the room because of their personality or whatever, maybe the guys don’t play as hard in front of them. Our guys love playing in front of Budes and he loves playing behind them. It’s a good marriage. I’m happy for Budes and he should get some acknowledgement for being the first-team All-Star goalie. Had to be a no-brainer. I don’t know what the results were or how the voting went, but there should be some more awards coming his way as far as I’m concerned.

Stothers, on the importance of having rookies who can contribute:
I’d be more excited if it was Dowd and Gravel. I’ve told you guys before, I don’t even ask. I don’t ask when they’re coming back, I don’t ask. I’m a realist, too. It would be nice but I understand the situation. Yeah, it proved itself here tonight. You looked at who was out of the lineup and we needed having Herr here, we needed to have Schmalzy here. We thought at one point maybe Vinny was going to get cleared to play and then you have the luxury of maybe moving Raine up front. JST hurts his shoulder in the – upper-body injury – the other night. That was unexpected … we were anticipating that Horvat was going to be able to come back and play tonight. So, man, you can never have a deep enough bench. It’s important and I guess it’s even more important now that they’re playing in the regular season before the playoffs actually start. That’s a tough way to get your first taste of a game is playing in the playoffs.

Stothers, on how important it is to get the No. 1 seed in the West:
To me? There’s nothing more important. There’s nothing more important than being No. 1. Last team, finished first, win the division, win the conference. Those are things that we need to implement into these players. This is part of the development, the importance of finishing as high as possible. There is no finishing second. Nobody remembers who finishes second. Right? It’s all about finishing as high as possible. Yeah, we’ve put a major importance on it. If it doesn’t happen it’s not the end of the world, but, to me it is.

Stothers, on Lowry’s play:
Well, did you talk to Joel at all? Did he mention our conversation after the second period? [Reporter: No]. Hmm. So, there’s still some growth in that young man. Chose not to shoot a puck in the second period, chose to pass it back into the middle of the ice, ends up going the other way. So I very gently mentioned to him that if he wants to remain in the lineup he should shoot the puck. He shoots, and scores. Now, I’m no genius, but, I mean, if you want to score then shoot the puck. It’s not that difficult of a concept. But apparently, with young guys, as with children, you need to constantly remind them. And when you have a video meeting at 10 o’clock in the morning, apparently by 7 o’clock that night they’ve forgotten again. So, he needed a little gentle reminder. But, he’s a great kid. I think he’s come a long way. He struggled to get in the lineup and now he’s in the lineup and he’s contributing to our team in a lot of areas and I think he’s going to be a real, real good prospect and a real good player for us. So, that’s why I had to check to see if you asked Lows about the one-sided conversation we had between the second and third. And I’m surprised you guys didn’t hear it out here. [Reporter: That implies that it was not that gentle]. It’s my way of being gentle.

Stothers, on where the team’s at in terms of being playoff-ready:
I still think that there’s some areas that we need to improve upon. It’s managing the puck … there’s some defensive zone faceoffs you lose, there’s some assignments that we know we should have and we’re a little bit late getting to that coverage or whatever. Icing a puck, getting a defensive zone faceoff when you could have taken two more strides and gotten the center ice red line and made sure that you can now change. Things like that. But, you know what, I commend this group on the way we played tonight. I thought that was a really good hockey game. Am I finicky and am I looking for the perfect game still? Yes. But, considering the lineup we had I thought it was an excellent performance by everybody.

Stothers, on the role of energy players:
Actually they were very good tonight. I was a little leery going into the game because of just inexperience. Leits is still learning the American Hockey League and you’ve got Schmalzy coming in from junior and Herr coming in. But it’s good for them to be in this type of environment. It’s getting close to the playoffs and games are very meaningful and important. Bakersfield’s trying to make the playoffs and we’re trying to win every game, so it’s good experience and I thought they did a real good job for us.

Stothers, on Herr:
I think he’s been pretty good. He kind of has a quiet game. It’s not like he does anything flashy or anything. He seems to be reliable, dependable. He seems to be aware in all zones. So, in the short report card that we have on him as a coaching staff he’s been impressive.