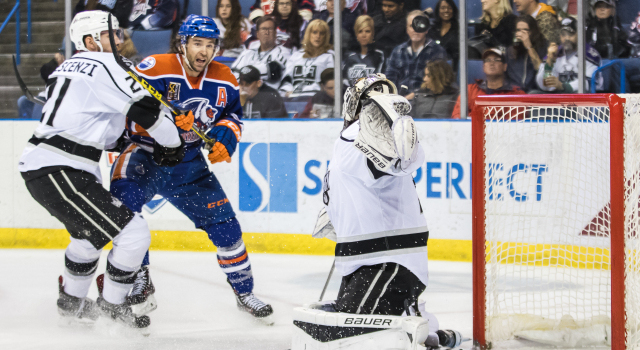 Reign game breakdown
Goalie Peter Budaj stopped 30 shots to earn his 40th victory of the season and Joel Lowry had his first multi-point game with two goals and an assist as the Reign (42-18-4-1, .685 winning percentage) played a full 60 minutes in a 4-1 win over the visiting Bakersfield Condors (28-27-7-2, .508) in Friday’s regular season home finale. After surrendering the game’s first goal with just 2.2 seconds left in the first period on the power play by Brad Hunt, Brett Sutter tied the game at 1 midway through the second. Lowry took over from there in the third, assisting on Justin Auger’s go-ahead goal and scoring the next two (a nice shot from low inside the right circle and an empty-netter to seal it). Condors goalie Ty Rimmer made his first start against Ontario and had 31 saves in the losing effort.

Best quote
Head coach Mike Stothers, on the importance of finishing No. 1 overall in the West: “To me? There’s nothing more important. There’s nothing more important than being No. 1. Last team, finished first, win the division, win the conference. Those are things that we need to implement into these players. This is part of the development, the importance of finishing as high as possible. There is no finishing second. Nobody remembers who finishes second. Right? It’s all about finishing as high as possible. Yeah, we’ve put a major importance on it. If it doesn’t happen it’s not the end of the world, but, to me it is.”

Three stars
–Justin Auger – Credited with the game-winner (his 18th goal), Auger contributed with his fourth multi-point game. Right off an end zone faceoff, somehow the 6-foot-7 winger snuck unscathed to the front of the Condors net and beat Rimmer low on a nice delayed feed from behind the net by Lowry to put the Reign up 2-1 7:10 into the third. Auger’s been good for an average of a goal every other game in the last 12 contests, consistency that will only help the Reign as they drive into the postseason. He also assisted on Lowry’s empty-netter. “Our team doesn’t take games off and we’re going to try to win out and keep that momentum going into the playoffs,” he said afterwards.
–Joel Lowry – There were times early in the season that the rookie out of Cornell couldn’t crack the lineup. He spent the first month between October and November working to get back from a back injury. Playing in his 38th game on Friday, the Calgary, Alberta, native produced his first multi-point game of the season, a late party with the wait. He looks and also said he feels more comfortable out there. His pass to Auger was just the start of it for him, the goal was even better. Coming from behind the net Lowry turned and fired high, eluding Rimmer for his third goal of the season. “He struggled to get in the lineup and now he’s in the lineup and he’s contributing to our team in a lot of areas and I think he’s going to be a real, real good prospect and a real good player for us,” Stothers said.
–Peter Budaj – “He went from zero to 40.” That’s from Stothers and that’s the kind of turnaround from last season to this one in the win column for the veteran Budaj. From no wins at St. John’s to 40 here in Ontario, Budaj’s now a first-team AHL All-Star with “more awards coming his way,” if you ask his coach. The Reign have strung together a three-game winning streak, all 30-plus save performances by the netminder who came back around to the word “thankful” multiple times when asked about the 40-win milestone. This game was his 20th straight start dating back to Feb. 17.

Turning point
Brett Sutter cracked Rimmer with a great individual effort in front of the net to tie the game at 10:27 of the second. Michael Mersch and Sutter provided traffic in front for a Derek Forbort shot and the end result was Sutter battling away to knock in his 9th of the season.

This and that off-ice
A contingent of 10 were in attendance to support Jonny Brodzinski, including his mother Kathy and father Mike in town from Minnesota. … The team announced before the game that D Jacob Middleton was released from his ATO and signed by the ECHL-Manchester to an ATO. … Captain Vincent LoVerde (neck/throat) took the ice for warmups but missed his 10th straight game.

Next up
Ontario wraps up this home-and-home at the Condors’ Rabobank Arena on Saturday night at 7 p.m. It’s the last regular season meeting between the teams and the Reign carry a 7-4-0-0 series edge. While the Reign eye the top seed in the West, the Condors moved further out of the playoff picture with Friday’s defeat.