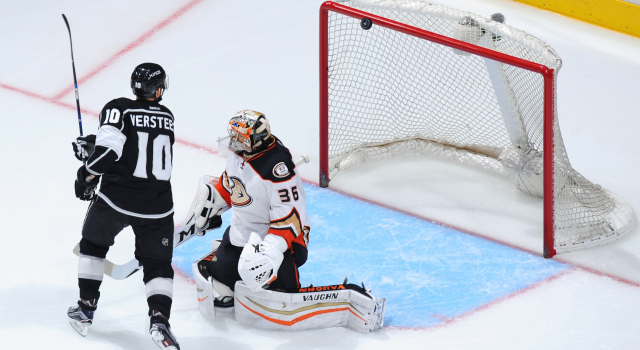 There weren’t many passengers at all in the Kings’ 2-1 victory over the Anaheim Ducks, a tight-checking, systems-aligned win in which Los Angeles received contributions from up and down the lineup and emerged in a familiarly narrow game against Anaheim in which the outcome was decided by one goal for the 10th time in the last 14 head-to-head outings. The game had, predictably, a playoff-like atmosphere and excellent goaltending, and with both teams going 0-for-3 on the power play and the Ducks scoring in four-on-four play, the Kings’ five-on-five game helped tilt the ice and generate consistent pressure, which was the difference against a very good John Gibson. Andy Andreoff and his line continued their late-season trajectory; it’s one thing when a “fourth line” is the best line in a loss, but for that line to provide energy and emerge as among the most effective lines in a key win over a rival that had played in the conference final last year, that’s a good indication that they performed quite well. The line had an excellent first period shift on a cycle before scoring a goal in the second period and drew a penalty shortly thereafter before Andreoff was whistled for a penalty himself in the third. That performance, combined with the sturdy efforts from the other lines, kept Los Angeles afloat; also credit Anze Kopitar’s line for getting in effectively on the forecheck, and even after Kopitar had the puck freed from his stick by Ryan Kesler early in the second period, credit Tanner Pearson for cutting off Korbinian Holzer’s space in deflecting a pinballing puck to Milan Lucic, who backhanded it into an open net for the team’s first goal. After Kris Versteeg’s go-ahead marker, the lead stood up, thanks in part to a Corey Perry missed opportunity when he fired wide from the mid-slot in the third period and a key Trevor Lewis block on a Jamie McGinn shot off a Ducks faceoff win that followed consecutive icings. In stopping 19 of 20 shots, Jonathan Quick was expectedly very good in a key late-season game.

Los Angeles’ second goal, scored 93 seconds after Lucic’s, was influenced by Kris Versteeg’s continued presence around the net. That’s been an asset ever since the club traded for him; of his four goals with Los Angeles, one came off a clear deflection, one came from burying on a knocked-down shot in the slot, one came from jumping on a loose puck in the crease after he got a piece of it with a deflection, and then last night’s came when he deflected a shot off the crossbar and pounced on his own rebound after putting his follow-up attempt off the post. There’s good hand-eye coordination there, and for someone who doesn’t crack six feet, he goes to a lot of the hard areas of the ice and isn’t afraid to get his nose a little dirty. He’s also versatile; his first two goals came when he skated on Kopitar’s line, his third in a six-on-five late-game situation, and his fourth on a five-on-five shift alongside Kyle Clifford and Andy Andreoff. Line adjustments are made based on the opponent, personnel and the schedule, and it’ll be interesting to see if that trio can forge out key postseason roles should they remained aligned together.

I’d like to say that Jamie McBain’s reintroduction to the lineup has been seamless, though he plays different roles than Alec Martinez does, and Martinez’s absence from the lineup necessitates a little bit of mixing and matching on the second and third pairs. Still, he’s about as valuable of a seventh defenseman as one can find, and he’s been a big asset over the last three games. He had roughly three inches of space on his second period 120-foot diagonal outlet to Jeff Carter, and he hit that seam with a 90 mile an hour fastball, allowing Carter to fire off a shot on the rush that forced Gibson to reach out and make a difficult glove save. He’s not necessarily an every-day option, but for the cap hit he commands and for the impact he’s had in his low-teen minutes, he’s a really good depth piece capable of stepping in when called upon and adding some punch from the blue line while on the power play.