Battle for Jennings Trophy heats up for Quick, Kings 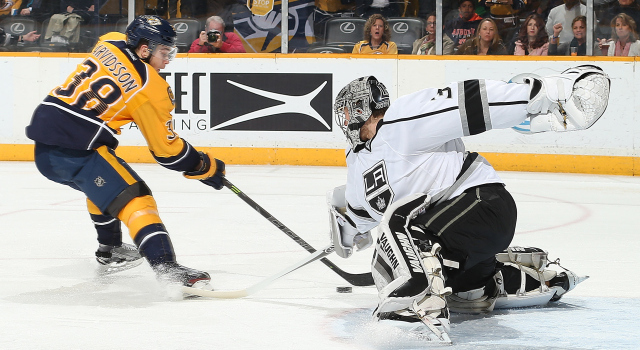 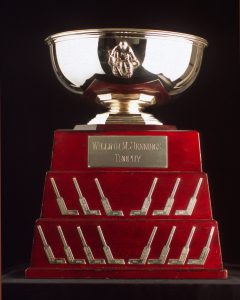 Two years ago, the Los Angeles Kings claimed the first William M. Jennings Trophy in club history on the back of a team-wide performance that yielded only 168 non-shootout goals.

That trophy was about the farthest thing from the team’s mind when Jonathan Quick was felled by a Grade 2 groin strain on November 12, 2013, opening the door for back-up goalie Ben Scrivens, and, ultimately, Martin Jones to carry the torch until Quick was ready and able to return on January 4.

“You could say too, that if it wasn’t for their play, we wouldn’t have gotten in the playoffs that year,” Quick said Friday at the team’s El Segundo practice facility. “Never mind the Jennings Trophy, we don’t win the other one, either, if they didn’t play as well as they did, so it’s kind of funny how it works out.”

“Yeah, we’re there every year,” Darryl Sutter said, and he’s right. The 1,034 goals allowed by the Kings since 2010-11 is the lowest total in the league, and Terry Murray, who coached one and a half years in that span, deserves his own recognition for his influence on the team’s structured and generally airtight play. “It’s one of our goals, to be in the top-five [for goals-against], all the time.”

It’s also a regular occurrence that his team’s performance is attached to the defensive-minded award. Four different Sutter-coached teams have claimed the Jennings: Chicago in 1993 and 1995, Calgary in 2006 and Los Angeles in 2014.

“It’s to me, the major team award,” he said. “I know there’s been lots of talk about individuals obviously when your team does well and the star factor, but to me the most important awards that just players go on are Jennings, Conn Smythe.”

Quick has won both, and he’s in the running to claim the Jennings for a second time. Awarded to any goaltender who plays at least 25 games for the team that allows the fewest goals in the league, Quick, Braden Holtby, and the Anaheim tandem of Frederik Andersen and John Gibson are all in the running. Los Angeles has allowed 191 goals in 81 games, Anaheim has allowed 189 in 80, and Washington has allowed 190 in 80. The Ducks and Capitals, both of which have two games remaining, face each other in Washington on Sunday.

“It started with coaches making us take pride in it, and it’s something that we realize we win more games when we play really well defensively and give up fewer chances and goals,” Quick said. “I think the past five, six years, the Cup winners, they’ve been in the mix They’ve been top three, four, five every year. I think it’s something where you get to this time of year and are playing hockey in the spring, you have to be able to win low-scoring games, and if you’ve grown accustomed to that over the year, it helps a bit.”

That was clearly an influence in the Kings’ tightly checked, 2-1 win over the Ducks on Thursday night in which Quick stopped 19-of-20 shots and Trevor Lewis surrendered his body to make a crucial late-game block on a Jamie McGinn quality opportunity off an Anaheim faceoff win.

“I think something we’ve been trying to focus on is blocking shots and penalty kill and things like that,” Quick said. “The guys have done a great job with that all season long, and for the past few seasons we’ve been doing that really well for a while. It’s something we’ve kind of grown to expect from each other, and it’s certainly one of the staples in our game when we’re playing well.”

The Jennings isn’t the only achievement up for grabs this weekend. Holtby is vying to tie Martin Brodeur’s NHL record of 48 wins. He’ll likely get in one of two Washington games on the weekend.

“Obviously if he’s in net Sunday night [against Anaheim], we’re for sure pulling for him,” Quick said. “But just to be in that mix, what he’s already accomplsiehd is absolutely incredible.”

Quick’s 40 wins – a career and franchise-best established on Thursday – rank second in the league, behind Holtby.