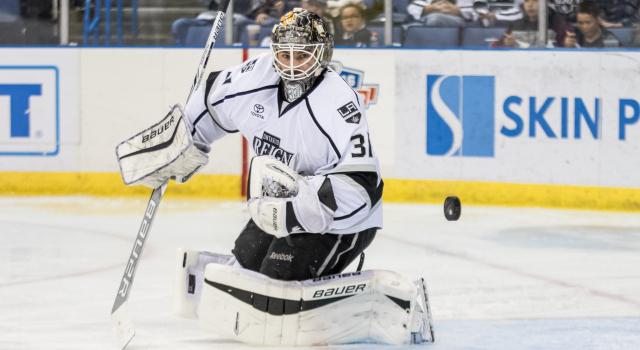 Peter Budaj, on his 40th win and first-team All-Star vote:
It feels great. I’m very excited and very thankful. … I’ve been having a very good season but it’s not just a reflection of me. It’s a reflection of the whole team, the way we play, the system that we do, the hard work that the guys put in front of me blocking shots, the little things. I’m very excited that I was able to achieve this. It’s a great honor representing not just me and my family but also our organization and everything else. It’s really good, but I just want to say thank you to my teammates and the coaching staff and everybody else to believe in me and giving me [the] chance to play that many games and being able to do what we did. It’s pretty good so far. We still have three games left so we’ve got to try to win all of them.

Budaj, on if he’s looking for a break:
That’s up to the coaching staff. I never tell anybody, that’s not my job. My job is when I get called upon to be ready and that’s what I’m trying to do and thank God I feel really good physically. I’m trying to take care of my body. … If you ask any goalie, any goalie wants to play every game. It doesn’t matter if it’s up here or in juniors, every goalie wants to play. That’s great that I’m getting so many starts and we’ll see what’s going to happen. If I’m going to play I’m going to be ready because I feel good and if not that’s going to be the coaching staff’s decision.

Budaj, on if he’s in a good rhythm:
I feel good. Obviously it helps when guys score four goals in front of me, always makes it a little bit easier, obviously. We have a good rhythm right now so hopefully keep going, keep winning the games so we can get to the playoffs on the best note possible so we feel good about ourselves.

Justin Auger, on where the team feels it’s at with three games left:
I think we feel pretty good. We’ve strung together a couple wins here. We’re not going to take our foot off the gas pedal. We’re going to keep pushing, we’re going to play every game hard. Our team doesn’t take games off and we’re going to try to win out and keep that momentum going into the playoffs.

Auger, on his goal:
It was a great play by Lowry, a lot of patience shown by him. He didn’t just try to throw it right away, he made that defenseman bite and once he bit, I think their guys were focused on picking up other players and I just snuck in behind them.

Auger, on last year’s playoff run and how that experience helps:
I think it’s huge. You look at, even in the NHL, guys with playoff experience are big key parts of teams. A lot of guys on our team returning from last year and going into this year’s playoff, the experience, you know how to win in the playoffs. You know what’s expected of you and winning a championship last year is definitely going to help with us doing that again this year.

Brett Sutter, on how the team has progressed since he came on:
I think just accountability. All the little plays right now, really stressing. We’re trying to take every game as if it’s a playoff game. Seven-game segments and using them as playoff series. Just really sticking to the detail and making sure we’re ready to go when the playoffs start.

Sutter, on finishing strong with the chance to clinch the conference:
I think that’s another thing we’re still going for, obviously. A division title’s nice but we still want that guaranteed home ice. … Pushing every night, we’ll push every night until the season’s over and that way we’ll make sure we’re ready for Game 1.

Sutter, on his linemates Michael Mersch and Jonny Brodzinski and their 16 SOG:
I think just we’re starting to build some chemistry. Played together for five or six games now. Brodz is so fast, he’s using his speed to open things up for us and Mersch is so good on the wall, making plays and he goes to the net hard. That opens up a lot of space, too. I think every game you play together you get a little more comfortable and we’re just starting to click.

Joel Lowry, on his goal that opened the third period:
I was just trying to get pucks on net. That was one of the things we harped in the pregame in video this morning was trying to get pucks to the net. I didn’t really see a play up to the point there so I just tried to get it on net and luckily it went in.

Lowry, on what was clicking for him:
I think I’m just starting to get my feet under me. It helps having some games under my belt now, too. Get a little more comfortable so I think that’s probably the biggest thing.

Lowry, on what he wants to bring to the team moving forward:
I think one of the big things for me is being physical, finishing checks and being hard to play against. As a team we pride ourselves on staying above teams and being really frustrating to play against. I think when you’re doing that and finishing your checks I think it makes it a long night on the other team.