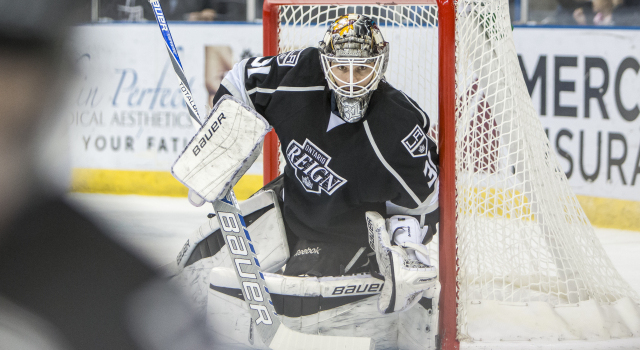 The 33-year-old netminder holds a 39-14-0 record this season and leads the league going into Thursday in nearly every important goaltending statistical category.

It’s been a rebound affair of epic proportions for Budaj, who’s in his first year with the Kings organization. A season ago in net for the St. John’s IceCaps, Budaj went winless at 0-9-6 in 19 contests. Now, he’s on the cusp of a 40-win season with the chance to earn that victory as soon as Friday when the Reign host Bakersfield at 7 p.m. in their final regular season home game.

For his efforts in Ontario, the Kings rewarded him with a one-year contract extension on March 2. Earlier in the season he was also selected to participate in the AHL All-Star festivities to represent the Pacific Division.

Behind Budaj, the Reign (41-18-4-1, .680 winning percentage) have clinched playoff berth and most recently the Pacific Division title with his season-high 46-save performance in a 4-1 win at Stockton on Wednesday.