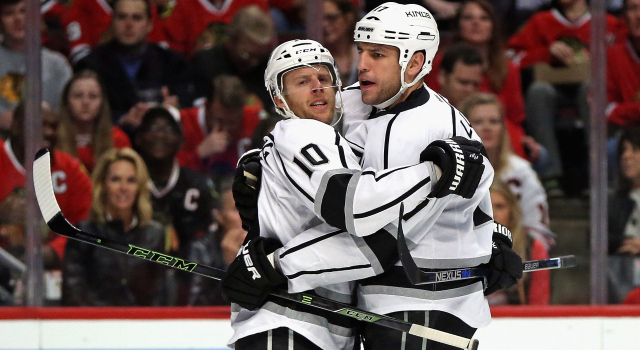 When Kris Versteeg drove towards the net and shuffled the rebound of Jamie McBain’s shot attempt past Joni Ortio on Tuesday, he was supported by a good cheering contingent that had commuted to the Scotiabank Saddledome from various corners of Alberta.

“Yeah I had a lot of family, my grandparents and my mom, my brother and a bunch of my buddies,” the Lethbridge native said. “It’s always nice to go back home and play.”

It was the first goal Versteeg had scored since returning to the lineup after sustaining a foot injury when he blocked a Dennis Seidenberg slapshot from a distance he had estimated at six feet.

“Bainer shot it and I just tipped it into the goalie, and I saw that he kind of couldn’t hold it, and I just poked it in when it was just kind of laying there,” Versteeg said.

It was his third goal with the club, and all have been fairly noteworthy; his first two were first goals in eventual routs over the Chicago Blackhawks and Dallas Stars before his game-tying, final minute goal in Calgary that drew the team even with the Flames in advance of an overtime session that Jeff Carter ended after 40 seconds.

One of the reasons the team had traded for him was because his penchant to create offense in key situations. He’s a two-time Stanley Cup winner who has 16 goals – three of which have been game-winners – and 42 points in 84 career playoff games.

In advance of Thursday’s game, he spoke about the additional focus when taking the ice in important late-game situations in which the team is trailing by a goal or tied.

“You do have to focus hard because obviously the fluids are drained, the oxygen’s gone and sometimes your brain shuts off, so you do have to be a little extra focused, and maybe even make that more simple play at times,” he said. “I don’t know what the reason is, I just try to get to the areas to score goals at certain parts of games, and if it works, or if you set up a goal, I feel like I’ve set up goals too at those times of games more than I’ve even scored, so it’s about trying to get the pucks to areas at certain times of games and really hoping for the best.”

Tonight’s game has a significant impact on the Pacific Division title, so the soon-to-be 30-year-old’s experience will be an asset to a Kings team that enters the night tied with the Ducks, who have a game in hand. Of course, Los Angeles has plenty of big-game experience, having won two Stanley Cups of their own and having faced Versteeg in the 2014 postseason.

“I think you always want to win and gain home-ice in whatever way you can, it’s always exciting to score in a game, especially at that moment of a game, to help the team. Teams like this, all of the top teams, they always want to win, it doesn’t matter what game it is.”