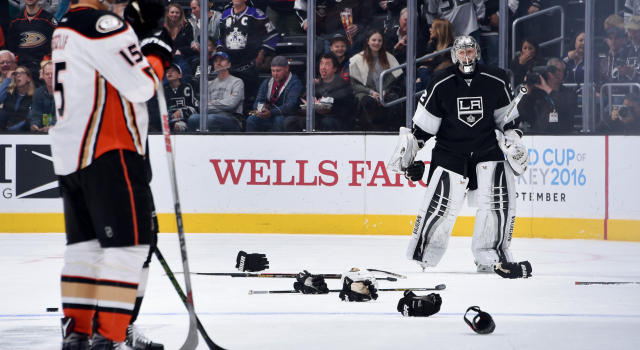 Good morning, Insiders. As it turns out, Game 81 of 82 has some significance for a team that clinched a playoff spot nearly three weeks ago. With the intersection of the Kings and Ducks’ success arcs – neither team had made the playoffs in the same year until 2011 – recent installations of the Freeway Faceoff have taken on added significance and urgency, but not until tonight has the rivalry provided such a tangible reward for the victor. Should Los Angeles win in regulation tonight, they’d simply need two points against Winnipeg in Saturday’s season finale to claim their first division title since 1991, and only the second divisional title in club history. Should Anaheim claim at least one point tonight, they’ll be sitting in the driver’s seat atop the division with a game in hand heading into a weekend back-to-back at Colorado and Washington. For more on tonight’s game, here is the SolarCity preview, All The Kings Men Podcast featuring Jesse Cohen, Lindsay Czarnecki, Jack Wilson and Jen Neale, and Luke Schenn insight towards what will be an electric environment at Staples Center later tonight.

All the Kings Men Podcast:

On whether he’s thinking about “two points or a rivalry”:
Two points, I think. Obviously we haven’t done well against the Ducks this year, as well as we would’ve likes, so I think that’s obviously something we’d like to get back on track, and it’s a big divisional game, but I think we need the two points. Right now it’s a big game for us as far as trying to gain points in the standings. We’re that close, and two games remaining, and I think they’ve got three, so I think it’s a really big game for obviously both teams tomorrow.

On defending against Anaheim:
I think they’ve got a combination of obviously a lot of skill, but they’ve got a lot of size. They’re one of the bigger teams up front and a lot of guys that are really good around the net, and a lot of guys that can make some skilled plays off the rush and some speed and some good shooters, and obviously their power play’s very good, too. No weaknesses, and it’s going to be a really good challenge for us.

On how Anaheim’s forecheck compares to Dallas’ forecheck:
I think Dallas has got a lot of speed and skill, and Anaheim, probably a little more physical, I think. Obviously both have got really good forechecks and a lot of skill up front, and maybe a little bit different style of games, but both very effective.

On how much Thursday’s game is about leaving an impression:
I think it’s, like you said, a big game for both teams. I think both teams want to leave a lasting impression. If anything goes according to plan, there can be a good chance that we could end up running into each other down the road in the playoffs. But in saying that, it’s not everything as far as a make-or-break game. We both probably have got big goals in mind, and tomorrow’s just another step in that direction for both teams, so obviously, for us, we [inaudible] want a response. We’ve kind of not played the best to our ability against the Ducks in particular, and they’ve had their way with us, especially at home on [our] home ice, so that’s something that we’re going to have to look to do a little bit better job of, hopefully.

On the conclusion of the regular season:
It’s always exciting regardless of where the standings are at. Playing Anaheim, it’s always a great rivalry, but tomorrow night in particular, like you said, obviously teams are [playing their] final couple games of the season here, and first place is on the line, so obviously it probably has a little bit of an extra effect. It’s got a little bit more of a build-up than maybe it normally would. They’ve probably been the best team in the NHL since Christmas on, and here we are today pretty much neck and neck as far as points go and kind of that sprint to the end of the season here. Both teams obviously are fighting for home ice and that division lead, and it’s going to be a really good challenge for us tomorrow. They’re a great team and they’re playing well right now.

On how he feels heading into Thursday’s game:
I think we still can play better, for sure. Obviously it’s nice to get the two points, and it was a grind more than anything last night. It wasn’t the prettiest two games, but we’ll take the win, and I think it gives guys a little bit of confidence. We realize we haven’t been as sharp as we need to in the past little stretch here pretty much since we clinched a playoff spot, but the good news is that we’re still in a good position here and coming off a win, I think guys are feeling a little bit better about themselves. You always want to wrap it up against a top team, so whether it’s the mentality or not playing teams out of the playoffs or in games like that, I think it’s a different mentality going into big challenges and games like this tomorrow.

On whether facing Anaheim gives the team more “incentive”:
Yeah, and I think they would probably say the same thing about us, too. Obviously when you’re coming down the home stretch here, you’re playing teams that are out of the playoffs and are kind of playing a little bit more loose and freely and have some young guys in the lineup with not a lot of pressure on ‘em. Those games can sometimes be a little bit more challenging than the games against the tougher teams just because teams aren’t afraid to try different things that they normally would. This is a game like I said where two big, physical teams and skilled teams are going at it tomorrow, and there’s a lot on the line as far as points and standings-wise, so I think these are the games that you look forward to, and I think we’re real excited for the challenge tomorrow.