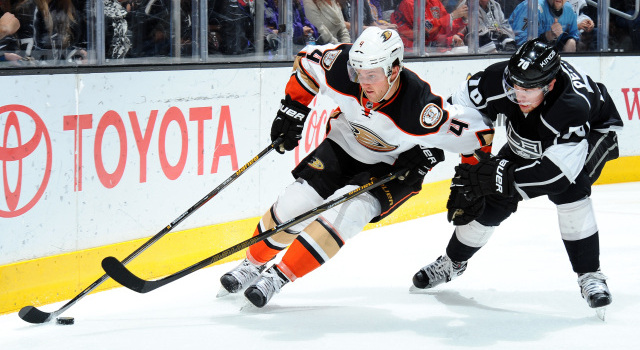 On whether the game was the team’s best recent performance:
Another good game for us. We’ve played several in the last – we’re coming off March, which was our second best month this year. We’ve played very well all season.

On the difference in the win:
You know, there’s momentum changes in games or big shifts during games, and obviously I think the goal early in the second, I would say, brought us back. We were playing the right way, we just hadn’t scored year.

On whether the team’s defense was better than the last game the teams played:
I don’t think there was much difference than the last [game]. I don’t see a whole lot of difference in our game from game-to-game. They score two goals, and the question that they ask was, ‘what was wrong with your defense?’ They scored once and they say our defense is better. There’s two great goalies, Gibson and Quick, so that’s why it’s a low-scoring game.

On what the team needs to work on in advance of the playoffs:
Probably all aspects of our game. We haven’t been very good the last little while.

On opponents crashing Jonathan Quick’s crease:
It’s that time of the year where guys go to the crease to sort of paint that blue there, so you go and stand right on top of them. Teams are known for that. I wouldn’t say teams are doing that to Quickie. Quickie’s a goalie, so that’s where he is, in the blue paint.

On Quick’s 40th win:
I bet he’s going to eclipse that this season. Good to see him get a win. He hasn’t had one for a little bit, so it’s good.