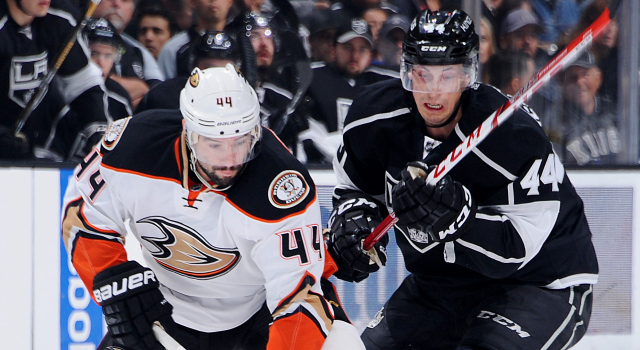 Boudreau, on the Kings’ defense:
They outworked us for two periods. You get 10 shots on goal, you’re not gonna have success. It wasn’t the recipe that we’ve had when we’ve been in this building before. … They were pretty determined, they came in, they outworked us, they got two goals in five minutes and that was the game.

Boudreau, on if the Kings’ two quick goals took the wind out of their sails:
At the beginning, it took us till probably the 10-minute mark of the second period to recoup and regroup and everything. It was two goals that were preventable.

Boudreau, on what he takes away from the loss:
We take with it that if we play as good as we can we’re capable of beating these guys. And we didn’t play as good as we could tonight, so that’s what I take out of it. We know we have two tough games (to end the season). San Jose lost, so … if [the Kings] beat Winnipeg and we don’t win both games, we know where we’re going and who we’re playing. At least that’s something that’s known right now.

Boudreau, on John Gibson’s play:
John Gibson was great. He stopped a couple breakaways, made some big saves at the right time in the third period to keep it a one-goal game. We just couldn’t score. That’s the third game in a row we haven’t got a 5-on-5 goal. We’ve got to change that.

Cam Fowler, on the Ducks’ puck possession:
It wasn’t as clean as we would have liked it to be. Against a team like that that’s extremely physical and creates offense from their forecheck, you have to manage the puck or you’re going to be scrambling all night and that was kind of the theme tonight. Our goaltender gave us a chance to tie it up at the end but it was a little too late there.

Fowler, on the Kings’ two quick goals to start the second period:
The one was just a bad bounce, kind of went right to their guy (Lucic) on the back door and the other one (Versteeg) I just lost my man in front. Have to be stronger and better than that and that was the difference in the game. Just not good enough.

Fowler, on the little offensive chances in the game:
There really wasn’t much out there. That’s two pretty big teams that can skate and like to get in on the forecheck. So, any time you got a Grade A scoring chance you had to make it count because you probably weren’t going to get another one. You have to credit them. I think only had 20 shots on goal. That’s the way they play. They make it extremely difficult on you and make it tough to create offense. It was a good job by them tonight but we didn’t execute as well as we could of.

Fowler, on the Pacific Division title possibly slipping away:
Whether we thinking about it or not we’re focused on playing our best hockey heading into the playoffs. And right now we’re searching for that a little bit and we’re just, in my opinion, a little too inconsistent. So, these next two games, whatever happens, whoever plays, whatever we end up doing is a good test for us to get to the level that we need to be come playoff time because you can’t just flip the switch when the playoffs come. You have to be going in playing at the top of your game or else you’re going to be in for a world of hurt come the first series. So, that’s all we’re focused on right now.

Fowler, on the playoffs:
With the NHL nowadays, especially the Western Conference, whether you’re 1st or 8th you’re playing a darn good hockey team in the first round. Of course winning the division is a goal of ours and it’s something that you can hang your hat on, but at the end of the day it doesn’t mean a whole lot. You’re still going to have to play at the very best that you can if you want to continue to move on and keep going, trying to chase the Stanley Cup. Regardless of who you play you’re going to have to be at the top of your game.

Ryan Getzlaf, on if the Ducks were a step behind tonight:
I didn’t think we managed the puck properly. You’ve got to give them credit. They came over top a lot, forced us to make plays through people, those kind of things. And we weren’t able to do it for the most part tonight.

Getzlaf, on not being in control of their own destiny in the division:
It’s fine. We’re just trying to get into the playoffs. That’s what we’ve been trying to do the whole time. We accomplished that and hopefully we can push through the end here and be ready to go whoever we’re facing.

Getzlaf, on the defense as a whole in the game:
It’s playoff hockey. That’s what we expected tonight. It was going to be a battle, difference of one goal, I think they always are. They got it done tonight.

Getzlaf, on if the Ducks need to find their brand of hockey going into the postseason:
I don’t think we need to find anything. I think we’re playing pretty good hockey. We played a great team. I’m not going to fault what they did out there either. We got a few execution things that we shore up a little bit. They got it done tonight, we didn’t. We just to keep pushing along. … We’ve got two games left here to get ready for the real thing.

Getzlaf, on the Pacific Division title slipping away:
It is nothing. Look who you’re going to face … pick Nashville or San Jose. Both great hockey teams and we’re going to have to be prepared no matter who we face.

Getzlaf, on the rivalry with the Kings:
Yeah, it’s been great. It’s built over the last nine-odd years. Both teams have strived to be the best in this division … we expect nothing else if we face them down the road.