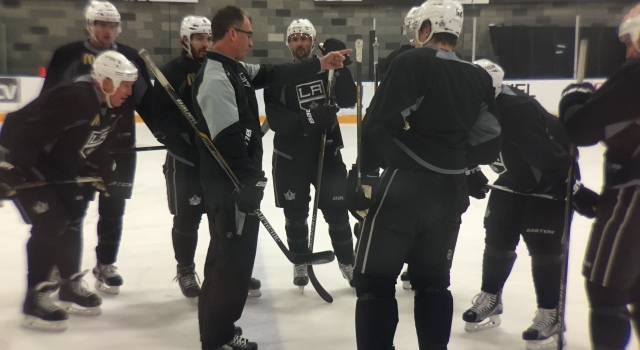 Good morning from El Segundo, where the Kings took the ice shortly before 10:00 a.m. in advance of their game tonight against the Anaheim Ducks (7:30 p.m. / FOX Sports West / KABC 790 / I Heart Radio).

-The team held a rush-like drill early in the skate as five-man units got up and down the ice; these drills showed an alignment of Lucic-Kopitar-Pearson, Brown-Carter-Toffoli, King-Lecavalier-Lewis and Clifford-Andreoff-Versteeg up front, with defensive pairings of McNabb-Doughty, Muzzin-Schenn and Scuderi-McBain. These rushes were altered when the team held actual line drills later – Kopitar skated in between Lucic and Carter at that point – so there there’s no clear indication of how the team should align at full strength in tonight’s game. Here’s your reminder that line changes change both game-to-game and in-game as game situations evolve and special teams play dictate adjustments. Nic Dowd, Kevin Gravel and Nick Shore remained on the ice for extra work with Jhonas Enroth and Matt Greene, so they’re not likely to play tonight. Jonathan Quick was the first goalie to leave the ice and will be expected to start against the Ducks.

-Alec Martinez did not participate in the morning skate and isn’t expected to play against Anaheim. No updates are available other than his day-to-day designation. Several of us have attempted to get updates, but clear injury information doesn’t flow freely at this time of the year.

-The set of circumstances is different, but does tonight’s game give off any type of a Kings-Sharks-Game-81-in-2012 feel? You know the game I’m referencing. “For some reason, it’s stuck in my head that we clinched five minutes into our game, so it went from a really huge, important game for us to make the playoffs to just a positioning thing,” Dustin Brown said about the April 5, 2012 game. “For some reason, it just sticks into my head. I remember it was like 10 minutes into the game that someone had lost, and we then clinched. Going into the game, 10 minutes prior, it was like we needed to win this game to make the playoffs, so it was kind of a weird scenario.”

-Two weeks ago the Kings hosted survivors, first responders and the families affected by December’s terror attack in San Bernardino, and FOX Sports West was on hand to take in the gathering. A preview of tonight’s Kings Weekly, which will air after Kings Live post-game coverage:

Kings Weekly also checks in with Bob Miller, wraps up Bark Madness and relives the goals of the year.

-The Ducks are 11-1-2 in their last 14 regular season games against the Kings. John Gibson is expected to start in goal; additional information from Anaheim’s morning skate will be updated to this post as it becomes available. More to come from Darryl Sutter, Dustin Brown and Kris Versteeg. 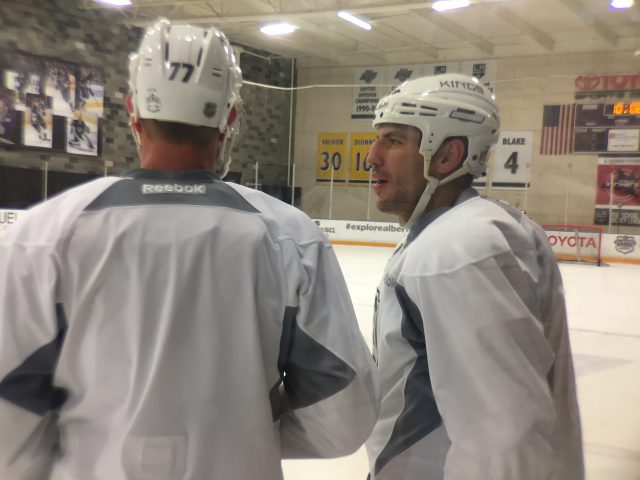