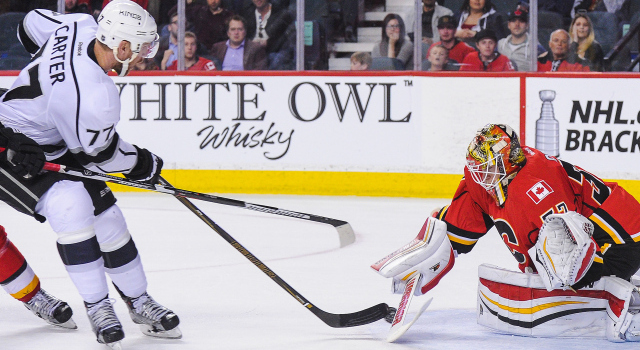 As soon as Jhonas Enroth misplayed a puck behind the net and Mikael Backlund called bank off Anze Kopitar’s skate, we knew we were going to be in for a weird one at the Saddledome on Tuesday night. Generally final-minute, game-tying goals followed by overtime game-winners elicit strong emotion from fanbases such as “pride” and “excitement,” but Tuesday’s win spurred a different mix not generally associated with wins such as “relief” as Los Angeles ultimately claimed two points in a bizarre two and a half hours in their final road game of the regular season. (Really, the stronger emotion may have come an hour later as Blake Wheeler scored in overtime to lead Winnipeg to a road win in Anaheim.) But, in a game in which the two teams combined for nine goals on 49 shots and endured sub-par goaltending, it was a third period that felt disjointed to the first 40 minutes that set the stage for an exciting ending. Through two periods, the Kings gave up very little. There was the flukish Backlund goal 3:41 into the game, and then there was, well, not much. Any time Calgary entered the zone with the puck in the first two periods, there was virtually no space available as Los Angeles skaters closed quickly and channeled most of the shot attempts towards the perimeter. And along came Johnny Hockey, who stickhandled his way into the high slot and unleashed a hard wristshot that Enroth did a good job of fighting off before the puck caromed to Hunter Shinkaruk, who buried a rebound as he cut across the low slot. That set the stage for the final 20 minutes and 40 seconds, in which the teams scored five times on the final 17 shots of the game.

The game-saving play for the Kings was Jamie McBain’s quick recovery with 50 seconds remaining after his first attempt towards the net was blocked. That was some high-level hand-eye coordination to stay with that puck as it could have easily caromed out of the zone. Interestingly, neither Drew Doughty nor Jake Muzzin (nor any defensemen who had played in Saturday’s game against Dallas) was on the ice as Sutter chose Kevin Gravel and McBain to take the ice when the teams lined up for a neutral zone faceoff with 90 seconds remaining. Los Angeles benefited from several bang-bang plays around the net – where most goals are scored – as Kris Versteeg scored the first of what many hope will be a collection of big spring goals by shoving a loose puck past Joni Ortio. As for Doughty, hopefully awards voters chose to watch his performance against the Flames, because it was a 32-minute opus emblematic of his stature as the best defenseman in the world. He was outstanding in controlling the game’s pace; virtually every read was excellent as he constantly found soft spots on the ice, won defensive zone battles and emerged as the best player for either team. Doughty has stated in the past that he feels like he’s in a better rhythm when he’s logging those 30-minute nights, and Tuesday’s game was good evidence of that.

That the Kings are battling for a divisional crown but chose to rest several regulars on the second day of a back-to-back shows you where the priorities for this team are in advance of the payoffs. Hint: It’s not to hang “dirty” laundry from the rafters. That would be a fine perk, but the team has been looking for individual players to refine their games in advance of next week, when line combinations, pairings, assignments and scratches are likely to evolve. It’s going to make for an interesting set of circumstances when the Kings and Ducks play on Thursday in a game that has a major impact on who faces the Predators in the first round and who faces the Sharks. With the magic number for home ice advantage in the first round of the playoffs whittled down to one, any point gained by Los Angeles or any point not gained by San Jose clinches two home playoff games at Staples Center next week. It will be interesting to see how the team forges forward to face Anaheim after back-to-back games against non-playoff teams will be followed by an emotional game that should serve as a tightly contested playoff preview. Similar to the way the Kings checked for the first 40 minutes on Tuesday, don’t expect too much space on the ice.