Toffoli has 30 goals. What’s the next step of his growth? 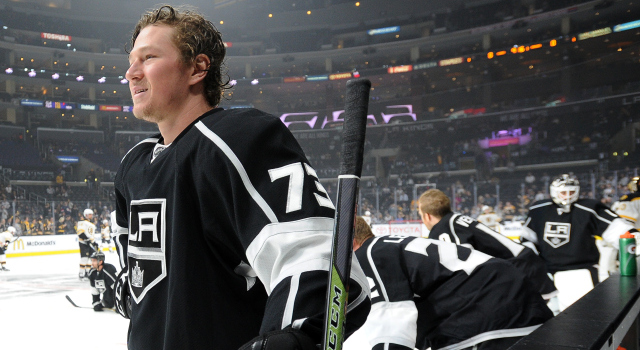 I’m not sure if you noticed, but Tyler Toffoli scored his 30th goal of the season last night.

“He’s setting the bar high for himself, that boy,” Darryl Sutter said. “Nobody talked about it after the game, but other than that stretch there after Christmas, he’s had quite a season, when you look at it.”

He certainly has. The last King to pot 30 goals in a season was Anze Kopitar who tallied 34 in the 2009-10 season that helped send Los Angeles back to the playoffs after an eight-year drought. It’s the 13th time a King has reached the 30-goal mark since the 1993-94 season. Luc Robitaille and Ziggy Palffy both did it three times, Alex Frolov and Anze Kopitar twice, and Dustin Brown, Mike Cammalleri, and now Toffoli, once.

It’s not a big deal as of right now, though, because There Is A Game Tonight.

“Yeah, it’s pretty cool, but like I said last night, it’s not something to really think about this time of year,” Toffoli said. “We’re focused on winning games and making noise in the playoffs.”

This spring will be Toffoli’s third playoff go-around. He’s known little else but winning, having emerged victorious from six of the seven series he has been a part of. But as opposed to when he made his playoff debut against St. Louis in 2013, or even when he played a significant role in That 70’s Line’s emergence the following year, as young as he is, he’s now a central figure in the team’s performance-based and intangible-based core. He was young then – well, he’s still young – but now, as opposed to then, there are higher expectations, more minutes, and a more central role amongst the team’s accomplished group.

“He’s a situation player,” Darryl Sutter said. “He’s one of those guys I keep talking about. He’s a guy that can play a lot of situations for a team, and he does it in a way that you don’t [take a lot of] penalties, and you spend a lot of time in the offensive zone, and he’s a pretty unique player in terms of the whole package.”

To say that Toffoli has driven play would be an understatement. He has tilted ice steeper than Cornice Bowl. With a 59.4% Corsi-for rating this year, his career rate has been upped to 58.6%. On a dominating possession team, his postseason +7.2% Corsi-for relative to his teammates is utterly remarkable. Whether he has skated with Anze Kopitar or Jeff Carter, or with wingers such as Milan Lucic or Tanner Pearson, he is accustomed to playing primarily in the offensive zone.

He also turns 24 in three weeks. What is that next step in his development as a pro?

“Just working harder,” he said. You can never work too hard in the gym, I don’t think. Last summer, getting time to train with Carts, Marty, Cliffy, Greener, I’m not really used to training with guys like that and how hard they work. I’m not saying it was an ‘eye opener,’ but it was definitely a great summer physically, coming into camp in good shape and just ready to go.”

It was, as he noted, a summer in which he remained in Los Angeles and did not spend extended time in back in Ontario – no matter how promising of a season the Blue Jays were having.

It’s that type of a buy-in that has been appreciated by his teammates, who appear to have easily absorbed him into part of the leadership group. Of course, scoring 30 goals will generally smooth over any transition.

When Darryl Sutter says that “we have a group of captains,” he’s primarily talking about the additional leadership afforded by players like Jonathan Quick, Anze Kopitar, Drew Doughty, Jeff Carter, Alec Martinez and Vincent Lecavalier, in addition to Dustin Brown. And while Toffoli may not be the same type of Matt Greene-like rousing dressing room presence, he’s comfortable enough in his own role to know when to assert himself.

“Everybody has a voice in our locker room,” Toffoli said. “I am not a guy that is going to step up and say something in the middle of the room. I am just going to say those little things on the bench when the time is right if I need to. We have lots of guys in our room that can do that, and everybody has a voice.”

There are other young players who’ve been parts of Los Angeles’ Cup-winning teams who’ll continue to be relied upon when the new season opens up next week.