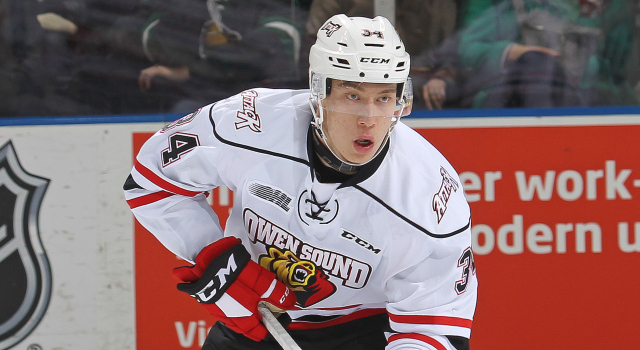 The Reign have added defensive prospects Damir Sharipzyanov (pictured above) and Jacob Middleton on amateur tryout agreements, the team announced on Tuesday.

Sharipzyanov (pronounced SHRIP-ZEE-AHN-OV), a native of Nizhnekamsk, Russia, comes to the Reign from the OHL’s Owen Sound Attack. The 20-year-old had 21 points (5 goals and 16 assists) in 46 games with the team this season before their early playoff exit to London (4 games to 2). Sharipzyanov also earned a silver medal at the World Junior Championships this year with Russia.

Read: Kings Vice President of Hockey Operations and Director of Player Personnel Michael Futa on Sharipzyanov’s play at the WJC.

Sharipzyanov, a left-handed shot, signed a three-year entry level deal with the Kings last August. Here are his stats, courtesy of Elite Prospects:

Middleton, 7th round pick by the Kings in 2014 (210th overall) just finished his four-year junior career in the OHL, spent mostly with the Ottawa 67’s. The 20-year-old, left-handed shot comes to Ontario after a productive season where he finished with 31 points (7 goals and 24 assists) in 68 games. The Stratford, Ontario, native, was named the team’s captain in January following a trade. The 67’s were recently bounced from the playoffs in an opening round defeat to Niagara (4 games to 1).

Here are his stats, courtesy of Elite Prospects:

The Reign are currently en route to Stockton via bus as they face the Heat on Wednesday night at 7 p.m.