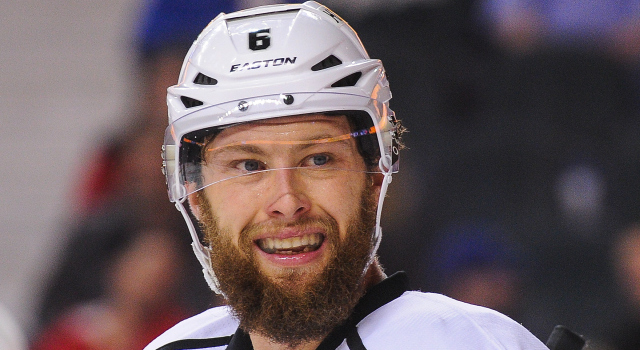 Milan Lucic:
On the tying goal:
Regardless of who got the goal there to tie it up late, Steeger got his stick on it before I did, but good job of us sticking with it and tying it up. Wins haven’t come easy for us on the road, losing five in a row on the road before this one. It took all the way till the end to get it into overtime and first shift of overtime we make it count. It’s nice to get a win and we can take some positive energy from this win and bring it into the last two games of the season.

On how this win sets up the game against Anaheim:
It’s obviously a huge game. The last three times against us they have won all three in regulation so it’s a huge divisional game and there is still an opportunity for us to win the division. Winning this game is a big one to set up Thursday night, so all of us are looking forward to that.

On how important it is to win the division:
Your goal when you start the season is to make the playoffs, and then finish as high up in the standings as you can. That’s still a goal of ours before the playoffs start, but I think the most important thing moving forward is to get our game and our identity back to what it was that got us the playoff spot. The last eight or nine games since we clinched the playoff spot we haven’t really been that great of a team, especially defensively, we have given up a lot of goals; giving up another four goals tonight which is uncharacteristic of our hockey club. We have to get better in that area to finish the season before the playoffs start and I think that’s the most important thing.

On playing a team the caliber of Anaheim instead of a non-playoff team:
Playing against a team that also has something to play for, so it’s going to be that playoff type of game, right before the playoffs. I think that’s why we are all looking forward to that game Thursday night, and it’s a big one for both teams. (Reporter asked about getting into that headspace of playing a game as important as Thursday’s) I know you guys haven’t seen many Kings-Ducks games down in California, but they get rockin and the fans are as excited as we are for that game. Like I said, lots to play for and we want to improve our home record too, that’s an important thing heading into the playoffs and we have an opportunity to do that as well with two games left.

Jake Muzzin:
On reestablishing the teams’ identity with wins like this:
It feels good. Obviously we haven’t been playing the way we wanted to and tonight we were good, but there is still room for improvement in some areas of the game. To come away with two points is huge for our club and to see some smiles on the guys faces again is nice, so happy plane home is always nice for the kind of feel around the guys.

On playing more Kings like hockey when playing a team like Anaheim:
The caliber definitely goes up. We have to improve on our down-low play in our zone. A lot of goals have come off of coverage and stuff like that, especially against a big team in the West like the Ducks, they strive on that so we will take a look at some of that and try to shut it down.

Jeff Carter:
On the game-winning goal:
It started out with us losing the draw and then they just kept cycling back and cycling back and I think they kind of got crossed up at the blue line and he kind of fumbled the puck and I just jumped on it. It’s one of those plays where I made a read and it’s either going to work out or they are going back 3-on-2 on our net and luckily it did. Not our greatest game, but this time of year we will take the two points and a win and we’ll go back home and try to finish out the season strong.

On setting the tone for the Anaheim game:
It’s a big game. We want to win the rest of the games here and get on a roll, but the main focus is dialing in our game. We have a lot of work to do still, cleaning up our game and we have a few left here to do it.

On how winning helps mentally:
A win is always nice. They have been hard to come by the last few games. A win is a win, it will boost morale a little bit, but like I said we have some work to do the next week or so.