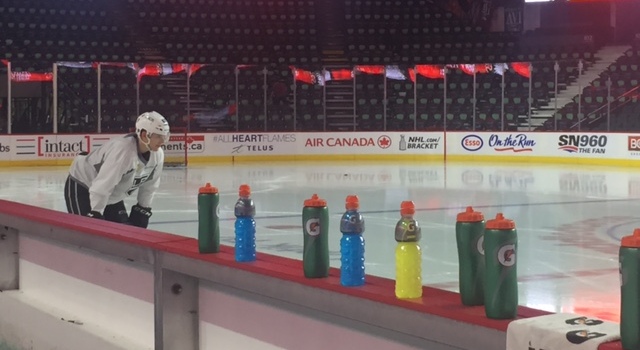 The Los Angeles Kings held team meetings at the Scotiabank Saddledome earlier today, and as reporters and broadcasters milled about, Andy Andreoff, Nic Dowd, Kevin Gravel and Nick Shore took the ice with Jhonas Enroth. There were no line rushes, obviously, and it isn’t clear who will get the nod in net in advance of the team’s final road game of the 2015-16 regular season.

While the players were on the ice, several Kings alumni were on hand outside the team’s dressing room as Kelly Hrudey (Hockey Night In Canada / Sportsnet analyst), Craig Conroy (Calgary Assistant General Manager) and Robyn Regehr (Blueline Oilfield Rentals) all stopped by near the team areas. Fun to see: Regehr’s kids were in Kings jerseys and hats. (It should also be noted that he’s taking part in a Flames event prior to tonight’s game.)

Darryl Sutter, on the keys to tonight’s game:
Play hard, finish opportunities. Played like that last night, just made a couple mistakes and couldn’t cash in.

Sutter, on what he wants to see from a “veteran group”:
We’re playing fine. I mean, you know what? You get results when everybody chips in. We have a lot of young players also that will be playing more minutes down the stretch here, too.

Sutter, on the perception that the team plays its best hockey when “it matters”:
Well, the teams are so even, and playoffs, the real way of looking at it, is that the playoffs started in October, so we’re just about finishing one round, and we’re in. So that’s winning a round, so we look at it like we’re starting the second round in about 10 days. So we’re trying to approach it like that.

Sutter, on Alec Martinez:
I’m not giving any updates on players anymore.

Sutter, on Vincent Lecavalier:
I think he came in, gave us a real boost. I think it was really important to have another left-handed centerman. Obviously we had lost that with Mike, so to get Vinny in, I like those types of guys who’ve had great careers and still have the desire to play at a high level again if they can, and at the same time accept a role. We went through before with guys like Denis Savard, players like that, and Vinny’s been awesome. I think the schedule has got him at times, and that’s up to me to manage him or play him or not. He’s been awesome, and I think what’s overlooked with Vinny is how great a player he’s been in his career, and has been a part of a championship as we all know in here. Hey, there’s a reason those great players are great players – it’s because he’s a great competitor. He’s still got that desire, which a coach is not going to impact that or a teammate’s not. It’s going to be him.

Sutter, on the “it factor,” and how this team compares with previous Kings teams:
Depends who you play. The first championship we won, Phoenix beat Chicago out the first round, so we didn’t have to play Chicago. And the next year in the conference finals, we had to play Chicago, and Chicago beat us out, and the next year we beat Chicago in the conference finals and won the Stanley Cup, so your opponent, you don’t know who your opponent is. It’s how close it is. Early in the season, the mantra was that our division was not a strong division. Well, that was because Anaheim had a tough start. So it’s a pretty strong division, so who your opponent is, you don’t know. I mean, it’s still wide open. [Reporter: Pardon me. My intention was to sort of evaluate your own club as you look at it. How do you evaluate your own club?] Hey, you win championships with your best players, so you do it at the end of the day. I mean, if you look at the last five or six years of Stanley Cup teams, the players that are looked on as star players really raise their level of play, and if you look at our team, there are five or six players that are pretty obvious, and if you look at the other teams that have won championships, it’s pretty obvious, too, so that’s what you’re looking for.

Sutter, on Tyler Toffoli’s 30 goals:
He’s setting the bar high for himself, that boy. Nobody talked about it after the game, but other than that stretch there after Christmas, he’s had quite a season, when you look at it. He’s a situation player. He’s one of those guys I keep talking about. He’s a guy that can play a lot of situations for a team, and he does it in a way that you don’t [take a lot of] penalties, and you spend a lot of time in the offensive zone, and he’s a pretty unique player in terms of the whole package. [Reporter: He’s still very young. As he takes that next step and continues to develop, what is that next step?] Well, you go from saying that he’s very young to somebody else saying we have a veteran team. Well, Tanner’s 23 and becoming 24, and I look at it as he’s a veteran. Other teams, they’ll use it as an excuse.

Sutter, on no Canadian teams making the playoffs:
Half the league’s still Canadian. I’m a proud Canadian, and I wish both Alberta teams were in the playoffs. I’m from Alberta. I wish all seven teams were in the playoffs, but if they were, it would be like last year where we might not make it. Vancouver, Calgary did, so it goes on and on. I still wrap myself around it. It’s still half-Canadian, and it is because we’ve got to pick out a team that you’re going to cheer for and not get too caught up in it. 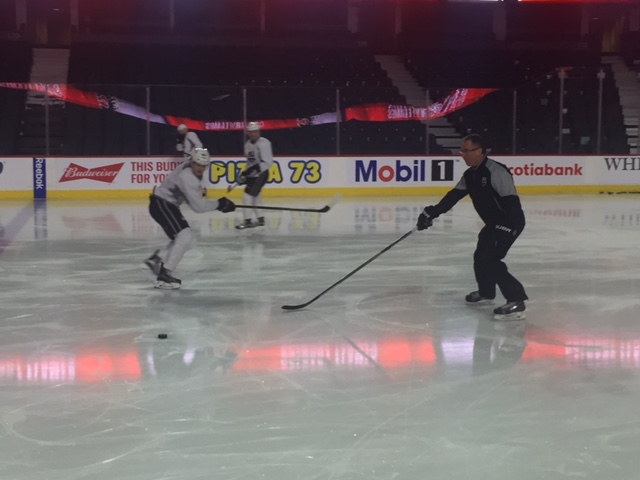